Undisturbed grassland, wild flowers, unusual fungi, wildlife. It may not be what most of us think of when we consider churchyards, but they can be wonderful oases in our busy world. Perhaps you have valued their peace and serenity over the last difficult year? Graveyards are frequently exceptional spaces because they have not been ploughed, cultivated or improved for hundreds, sometimes thousands, of years. This is really rare habitat – 90% of lowland grassland in the UK was lost during the 20th century (Wildlife Trusts). Carefully managed churchyards can be tremendously rich in wildlife, a haven for butterflies, moths and their caterpillars, a host of other essential insects, for the birds and bats which feed on them and for so many other small mammals, reptiles and amphibians. The Norfolk Bat Survey carried out in Forncett St Peter’s churchyard in August 2020 made 3,050 recordings of bush crickets alongside the 7 species of bat (St Peter's Goes Batty). It looks as if Common Pipistrelle bats are the most likely to be roosting in the church with over 3,293 recordings. Natterer’s bats were the next most frequently recorded, of particular interest as they were not previously known to be using this area of South Norfolk. The small meadow around St Edmunds also showed what can be done – a change in the mowing regime resulted in an amazing explosion on cowslips and other native wild flowers abuzz with insects. 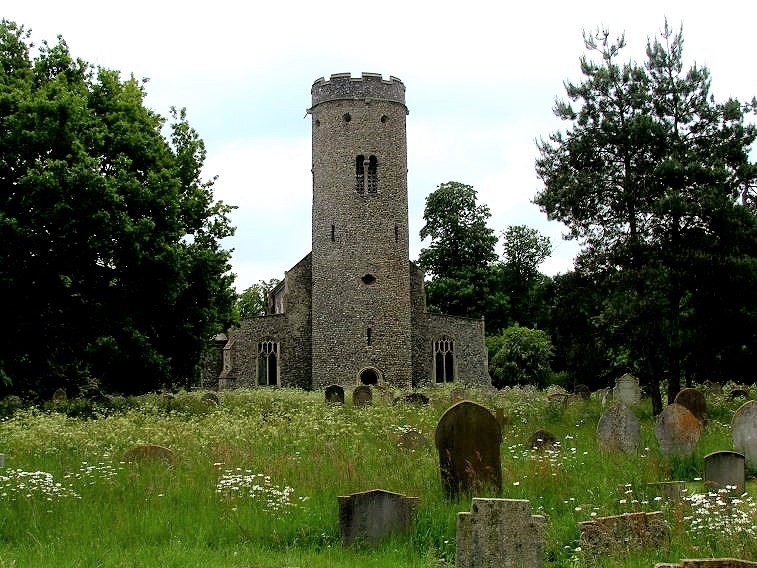 None of this is possible without thoughtful care and maintenance. This often involves doing less and doing it at the right time of the year. A very tidy churchyard with close mown grass, neatly trimmed hedges and no wilder corners can be almost sterile from a wildlife perspective and lack atmosphere for people. Wild plants need time to set their seed. Caterpillars and other immature insects need places to feed, grow and develop into adults. The Norfolk Wildlife Trusts Churchyard Conservation Scheme was set up to help churches make the most of their unique habitats for wildlife. St Mary’s is already part of the scheme and St Peter’s will join soon. The scheme offers maintenance advice and free plant surveys – a great way for members of the community to get involved and learn more about what we’ve got. Are there any wax cap fungi to be found? Excuses for a community picnic perhaps when such things are possible again!

Churchyards have many roles: a final resting place for those who have died, a place of comfort for relatives and friends to remember their loved ones, an oasis of beauty and tranquility for us all. Nature too needs space to flourish. It’s a bit of a balancing act so that graves don’t end up looking neglected and is there a lovelier way to rest than under a carpet of oxeye daisies and butterflies?