What's New from our Supporters?

We love to hear what our supporters are seeing out and about in Forncett.  If you have something you'd like to share here please tell us via our email address

The Wildflower Meadow is cut and the hay stacked before the heavens open! 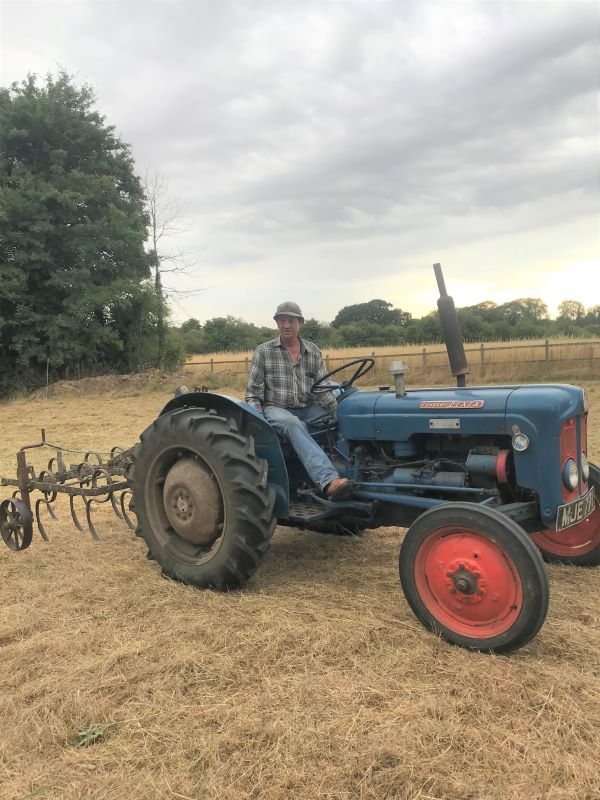 Kenny Sutton has been helping out several small-meadow owners in Forncett on his blue Fordson Dexter and his red International McCormack tractors. He is currently restoring a red Massey Ferguson 135, an even smaller and more powerful machine.  As more people want to manage their bit of land for biodiversity, they often need a machine between the size of a ride-on mower and a big farm tractor when it comes to cutting in late summer. That is, if scything isn’t an option. The volunteers helping to cut the more inaccessible conservation area at St Peter’s churchyard did some of the work with scythes. All power to their elbow - and their midriffs!

There have been several sightings of Hummingbird Hawk-moths around the village this summer. They feed on a wide variety of nectar bearing flowers and because of their super-long proboscis they can reach deep inside their chosen flower. They are quite exotic in appearance, and as their name suggests, they hover and dart at great speed. This makes them difficult to photograph or video, because they move so fast! So we’ve also included a beautifully detailed photo  by Ian Lindsay from Pixabay

Look out for Ivy Bees  at this time of year. 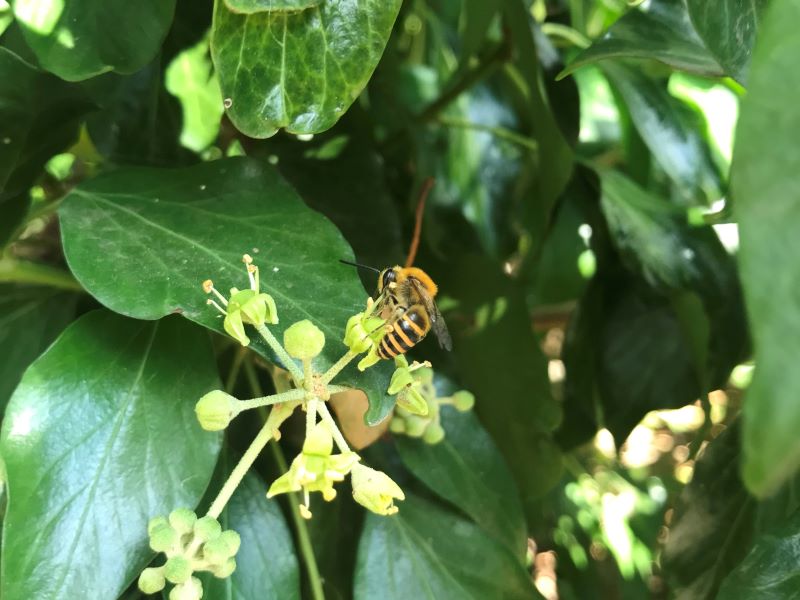 First recorded in the UK in Dorset in 2001, this solitary bee has gradually spread northwards and eastwards. In late summer, newly emerged from their tunnels, they may be seen in gently humming clusters, busily gathering pollen and nectar on flowering ivy plants. They are active from late August until late October here in Norfolk.  The males are 1cm in length and the females slightly longer. They have dense orangey fur on the head and thorax, with distinct black and yellow stripes on the abdomen. Please don’t trim ivy while it is flowering. It is the only food source for this little bee, and it also supports a great variety of other pollinating insects. And of course if you can allow your ivy to form berries it provides valuable food for birds in winter.

Large-headed  Resin Bee:  Bee and bat man, Mick Finnemore, got in touch with us about another small bee for us to look out for. It’s not as rare as the Shrill Carder which he talked about at our Pollinator Plant Swap meeting, but nevertheless an unusual and interesting one. 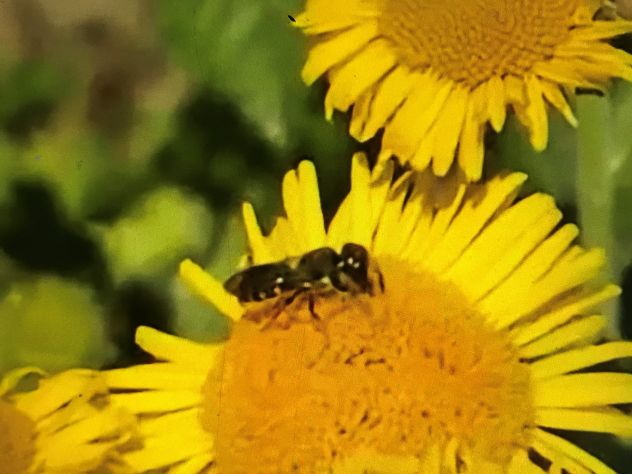 It’s the Large-headed  Resin Bee (Heriades truncorm) which he spotted initially on Oxeye Daisies, and then later on yellow Fleabane, a fairly abundant wild plant around here at the height of summer.  Mick says, “It has a curious bobbing motion as it picks up pollen on its pollen brush under the abdomen.” This characteristic movement helps to identify the species.

Ragwort: The golden flowers of common ragwort are a valuable source of nectar and pollen for a huge variety of hoverflies, bees and butterflies etc. Ragwort is also the main food of the Cinnabar caterpillar, larva of the dramatic red and black Cinnabar moth. These unmistakeable gold and black stripy caterpillars are distasteful to birds, and according to Plantlife the cuckoo is the only bird that can eat them! 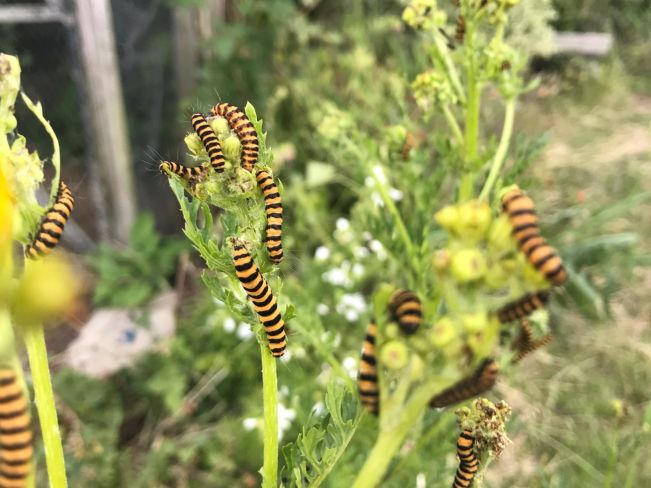 Though this plant is usually avoided by grazing livestock, dried ragwort is dangerous, and official advice is to remove it from pastures and hay meadows. A sensible compromise for gardeners (if your wildpatch is situated away from these areas) is to leave a few plants so you can encourage and watch the Cinnabar lifecycle. The caterpillars, working from bottom to top, will completely strip the leaves and eat the flowers too, but you may like to remove any remaining flowers before they go to seed (wear gloves to handle ragwort). Cinnabar caterpillars will also eat groundsel. These dramatically coloured invertebrates pupate underground in September, to emerge as beautiful moths the following May. 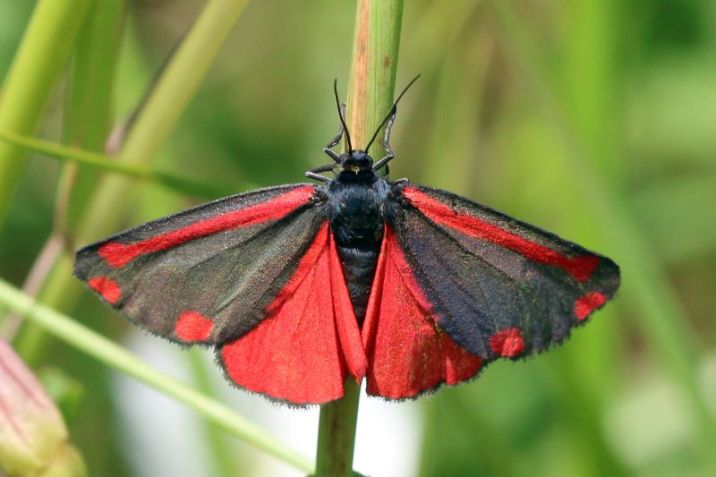 Buff Tip Moth: One of our supporters sent us photos he’d taken of the brilliantly camouflaged buff tip moth (Phalera bucephela). They look just like short thick birch twigs, and although fairly common, they are tricky to spot. Mainly silvery grey, they have a square cut buffy head and a buff patch at the end of the wings, which gives them their common name. This photo is of a mating pair. 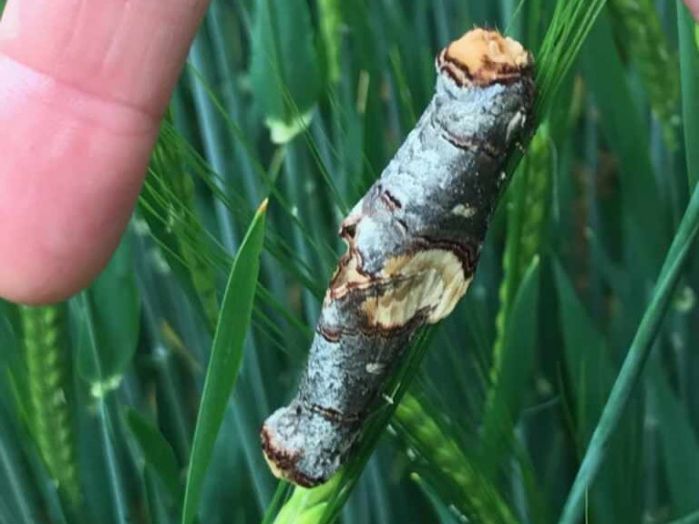 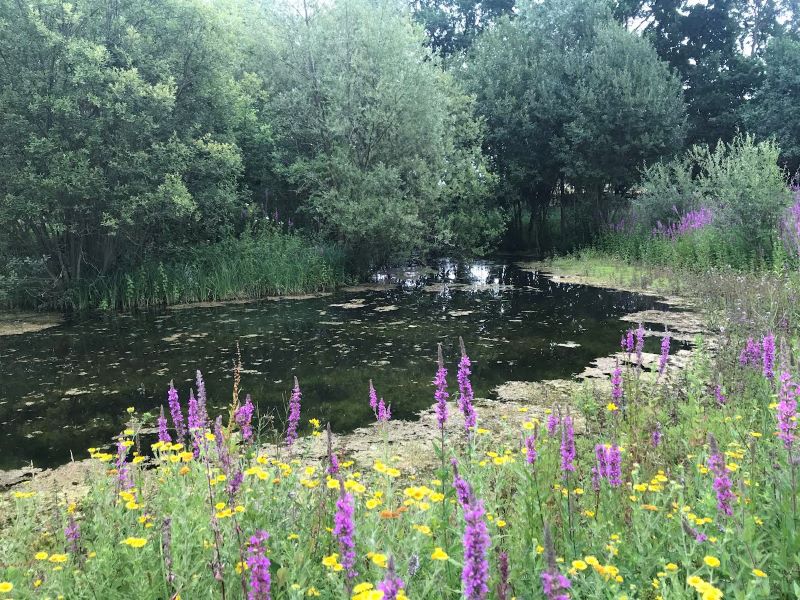 The beauty of a large wildlife pond Photo: C Wakeford

The pond is inhabited by the Forncett edible frogs, that sound like quacking ducks in the breeding season! Read about them here.  But size doesn’t matter. Here’s an example of a more formal, newly constructed and planted small pond for wildlife. Within weeks, great crested newts had moved in. Tip: for the smaller pond choose the less vigorous native plants - many species will completely take over! 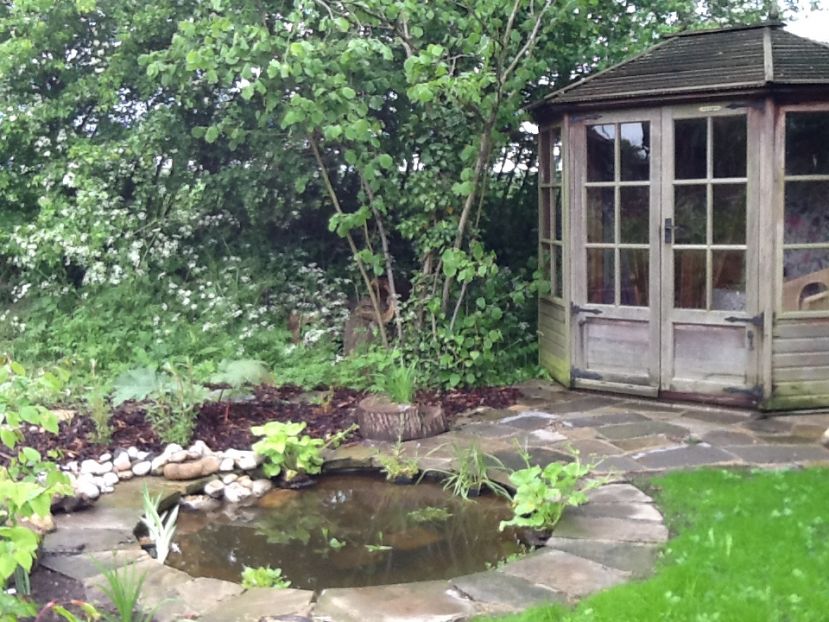 And remember to include shallower areas at the edge for bathing birds, and escape routes for inquisitive hedgehogs.

For more information about ponds for wildlife how about coming to our meeting on 16th September 2022?  Details in Coming Events.