The Extraordinary History of Frogs in Forncett and Norfolk

Our elegant and native frog Rana Temporaria still has strongholds in Norfolk. It is the one we see hopping in our gardens – a wonderful friend – predating on slugs, snails, greenfly and beetles. It inhabits territory in the vicinity of ponds, dykes and slow moving rivers and I once had a young frog in my rusting fish kettle under a hedge for several months, regarding me as I passed with its beautiful golden eyes. However, the frog picture is more complex than we might think. 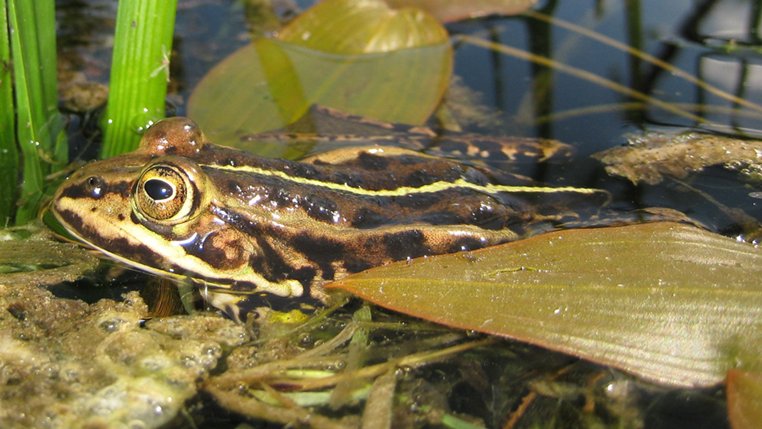 Female Pool Frog. Photo: With thanks to Jim Foster

Frogs spawn early to give their young a whole spring and summer to complete their metamorphosis from frogspawn egg to tadpole to small frog before winter’s cool grip. All frogs, toads and newts are amphibians and breed in water. They have smooth supple skin and in colour vary from bright green to brown and ochre with dark markings on their back legs and behind each eye. Female frogs often have flanks splotched with yellow and brick red, dotted with pearly spots.

For about 200 years frogs from continental Europe have been introduced into Britain, often by rich landowners such as George Berney of Morton Hall in Norfolk. These species are closely related to each other and are confusingly referred to as ‘water frogs’ or ‘green frogs’. These frogs have a basking habit, resting on pond banks or floating mats of weed. If disturbed they dive spectacularly into the watery depths. The native frog does not bask in this way although it leaps elegantly away when startled often startling us! It can move further away from water when not breeding. Continental frogs now probably outnumber the common frog and sadly we allowed the indigenous Norfolk Pool Frog, present since the last ice age, to die out by 1999.

Early in this century studies, including the discovery of an ancient pool frog bone in a Saxon, Fenland post -hole, revealed that the northern race of Pool Frog was native to Britain and not an introduction. Pool frogs arrived under their own steam after the last ice age 10,000 years ago and before Britain was cut off from Scandinavia.

In Norfolk the brown-skinned pool frog had lived in glacial ponds known as pingos. Unfortunately as zoologists began to realise the significance of these Norfolk frogs it was too late to halt their decline into extinction. ‘Lucky’ the last pool frog died in London in 1999 without a mate.  Julia Wycherley from the Surrey Amphibian Group clinched the evidence through her brilliant analyses of archive sound recordings of Norfolk pool frogs from the 1980’s and her study of the croaks of pool frogs across Europe. She found subtle differences between the Scandinavian population and those of the continental south. The deceased Norfolk pool frogs had Norwegian accents rather than French ones! Wycherly describes their croaking as a rippling, squeaking, purring sound.

At the Forncett Industrial Steam Museum are edible frogs ‘ridibunda’, a hybrid species between the marsh and pool frogs. These were introduced from Nantes in 1972 by Mr Wong who owned a Norwich restaurant. The young frogs escaped their enclosure in the pastures of Yew Tree Farm and moved slowly into the ponds and ditches of the Tas. At the Steam Museum the handsome creatures appear on the first warm days of April and May. They have a prominent dorsal stripe and can catch their prey by leaping and grabbing it in their mouth. This can include dragon- flies and hatchling moorhens. They have pointed snouts and the powerful voice produces a sequence of duck like quacks culminating in a soft rattle.

Since 2000 efforts have been made to reintroduce the Northern pool frog into Norfolk from Sweden. I am hoping that the pingos are once again reverberating with musical purring.