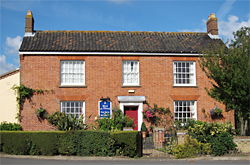 On a cold drizzly day the four of us scurried from the large car park into the warmth of the bar; our group included one who had a medical condition that results in sudden shaky hunger, so before we even sat down I asked for a bread roll to be brought to the table for him. This appeared – warm and with butter – in a matter of minutes, but the salt-free (probably Lurpack) butter was a slight disappointment.

We had reserved a table so were able to take possession immediately and as soon as I sat on the bench under the window I realised that there was a heater under the seat. Being prone to overheating I soon moved, and my place was taken by my rather nesh sister (she is from up North where they know what that word means.) Our designated driver was delighted that the bar stocked OJ in his very favourite raspberry flavour, and I made ample use of my back-seat-driver status by getting outside a half pint of good John Smiths bitter (hand pulled). The wine list revealed a good selection of wine, all conveniently priced at £12 for the bottle, or £3.65 for a glass so my sister chose a sweet white that she declared was fairly rare to find in these sophisticated times.

We struggled to determine which of the menus was applicable for the occasion, but soon decided on three main-course items from the lunch menu and one from the specials. My (traditionally cooked) jacket potato came smothered with big fat prawns gleaming with sauce, accompanied by a decently generous salad and portion of coleslaw. My Sister’s cheese omelette, and her husband’s mighty-meaty burger came similarly attired. The ‘special’ was a whole trout with couscous, served with seasonal vegetables that retained a certain amount of crunch. A generous separate portion of chips arrived and these we shared. The price range for our main courses was a very reasonable £6 to just under £10. We discussed between us whether hot food served with salads and coleslaw should be delivered on hot, or cold, plates - or indeed on separate plates. On balance we decided that warm plates would have been better, especially in such depressing weather.

Two of us somehow found room for pudding, so I chose a swirly lemon cheesecake adorned with an out-of-season strawberry, beautifully ring-fenced by zingy raspberry coulis. The serving was generous enough to share with my sister who ‘hardly touches her food’ but makes up for it by helping me finish mine. I in turn helped to finish some superb ice cream created by the simple coming together of raspberries, clotted cream and sugar. This accompanied a frangipane and pear tart that would have been a share-able size if I had got to it sooner, but the eater was busy searching for the somewhat elusive pears that were mentioned.

Occasionally you find yourself faced with something you are sure you didn’t order. In this case the misunderstanding was down to too much chat and lemonade, and not enough spectacle-cleaning. My friend was expecting the frangipane tart to come with clotted cream, and raspberry ice cream. What it came with was clotted cream and raspberry ice cream - the ‘oxford comma’ making all the difference. As it was I who benefited there are no demerit points there!

Only one of us chose to have coffee, and the coffee machine chose not to co-operate. After a few spluttery attempts to shhhhushhhh the milk, my sister accepted an apology and the offer of cafetière coffee instead.

Total cost for four, £44. Drinks about £7.
Satisfaction rating, very good.
A few demerit points for lardy butter and the cold plates.
Would we go again? Definitely!