Amazing dragonflies of the Forncetts

Dragonflies are remarkable insects of sunshine and summer warmth.They have gauzy wings and rich spots and stripes of colour. They spend most of their lives as aquatic ’nymphs’ and emerge as adults with incredibly light, strong wings, powered by large muscles in the thorax. Their aerial skills are astonishing: they are able to use each wing independently, to hover, to fly sideways and backwards. They also have a pair of multi-faceted compound eyes that give them brilliant panoramic vision and they eat large numbers of midges and mosquitoes.  Two distinct types of feeding behaviour have given rise to two groups of dragonflies: the Hawkers and the Darters. The Hawkers can fly at almost 30m.p.h. They patrol up and down or zig-zag above the water, while Darters make dashes and skirmishes and brush the water’s surface as they hunt their insect prey. 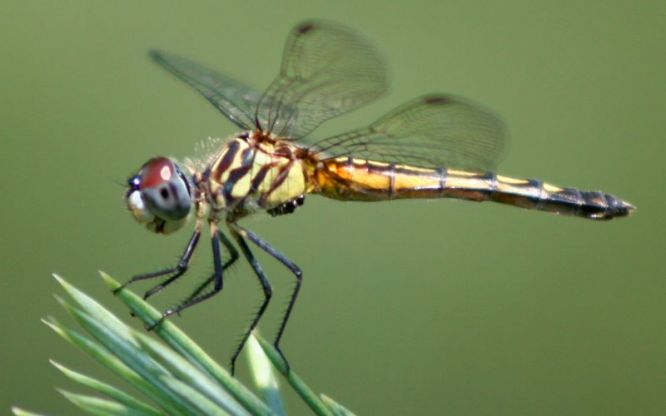 Dragonflies were one of the first winged insects to appear on the planet around 300 million years ago, long before the dinosaurs. Some of them were huge. Fossil dragonflies with wings as broad as eagles were found in a coal seam in Derbyshire where they once roamed over carboniferous swamps and forests.

Norman Stevens moved to Forncett St Peter a few years ago and in 2018 built his pond, using a variety of native water plants. A few days after completion, as if by magic, water boatmen and pond skaters arrived and by spring 2019 a Broad-bodied Chaser of the palest blue appeared.

The large Emperor dragonfly, seventy-eight millimetres in length, eats its prey, including butterflies, in flight. The male’s abdomen is bright blue, the female’s is green and both have a distinctive black line down the centre of the thorax.The Golden Ringed Dragonfly can be a nymph for five years. Norman sees the empty cases of the larvae on the rushes and on greater Spearmint. It is a large dragonfly with stunning green, bulbous eyes, and a black and gold striped body.Its feet end in black, gripping pincers for perching on plant stems. Naturalist John Gilbey describes the ‘deep, chitinous drone’ of its wing beats. 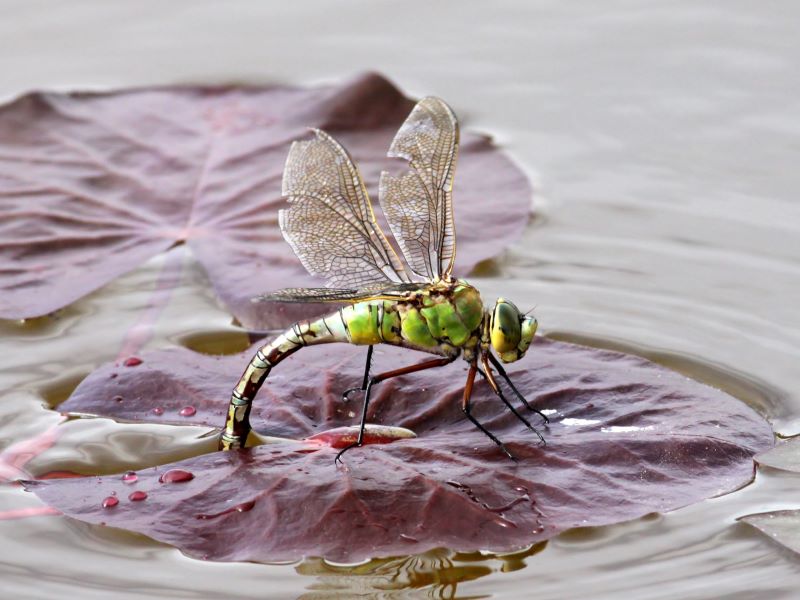 Norman’s pond has become a haunt of beautiful dragonflies. He says that he was lucky to have a good, linked terrain of ponds and ditches in his area of Forncett that make interconnecting waterways where the dragonflies can live, breed and survive as nymphs and adults in water that is not too polluted.

Dragonflies come together to mate in an arcing wheel formation. The female then ‘oviposits’ fertilised eggs into vegetation or water. When hatched the larva or ‘nymph’ spends the next two or three years as an aquatic predator. When full grown it climbs the plant stems of pond or river bank, the skin on its back splits and the adult dragonfly emerges as a ‘teneral’. It is thin and pale and for perhaps two weeks needs to sunbathe and eat to gain strength and lustrous colour. Its life will be surprisingly brief, often only a couple of months, while damselflies are even more short-lived, usually for a couple of weeks.

How We Can Protect Dragonflies.