A B-Line for the Forncetts was first proposed exactly a year ago in the Earth Matters section of the Forncett Flyer . The B stands for BIODIVERSITY - of plantlife, insects, birds, amphibians, reptiles and mammals.  Plants and insects support all life further up the food chain, so the aim is to create ‘stepping stones’ of flowery areas for pollinators, and ‘green corridors’ all around our village. Our large scale parish map shows Supporters’ plots, and we can now see the potential for joining up these pioneering areas. It will be displayed at our ‘Pollinator Plant Swap’ Forncett Village Hall 7:30pm Friday 20th May - all welcome.

If you haven’t joined us yet and you’re a wildlife-friendly gardener, please contact us at and we’ll include you on the map.

What kind of planting will encourage pollinating insects into our gardens?
- A densely planted mix of flowering annuals, perennials, climbers and shrubs, blooming all year round in succession (providing shelter for other creatures too.)
- Mainly single-flowers rather than doubles. Nectar and pollen in these simpler plants are more accessible.
- Plenty of native plants.
- Be warned that many plants labelled ‘pollinator-friendly’ have been treated with pesticides which will kill your pollinators! Grill your supplier, and source organically
grown plants.
- Allow some so-called ‘weeds’ where practical. There is a native weed, aka wildflower, in bloom in every month of the year, catering for a
wide variety of insects. Dandelions bloom at just the right time for emerging bumblebees.

Other early wild plants include lesser celandine, primroses, cowslips, violets, herb robert, and speedwell. Ivy is a great late food source but restrict it to the bole of the tree as ivy in the canopy causes trees to be vulnerable in high winds. Could you leave an area of your garden to accommodate some of these valuable wilder sources of nectar?
Deep rooted plants, such as bindweed and dock mine the soil for minerals (and can be left in a bucket of water to rot down and ultimately returned to the soil.) But if you have space, some bindweed in an out of the way corner is beneficial for moths; nettles provide food for butterflies and their caterpillars, so do leave some if you can.

Digging disturbs dormant weed seeds; instead, you can cut then smother most unwanted weeds with dampened cardboard layers, topped with a deep mulch (grass cuttings ok). I’ve used this method very successfully when creating new borders - far preferable to killing with harmful chemicals (including vinegar and salt). Pesticides were the third criterion listed by Plantlife. Pesticide is a general term that covers insecticides, fungicides and herbicides. Obviously, if you want to attract pollinating insects you won’t be using insecticides, nor fungicides, hopefully. Over time your garden will find a natural balance if you can tolerate a bit of damage in the meantime. But what about herbicides - weed killers? Glyphosate (Roundup) was marketed in the 1970s as environmentally friendly, and was used happily and liberally by many of us. We now learn that this chemical adversely affects soil life, waterways, wildlife, and our own health (Pesticide Action Network). At the very least we would encourage you to minimise the use of herbicides in the garden, ideally giving them up entirely. Many councils, recognising the dangers, are no longer using herbicides in public spaces. 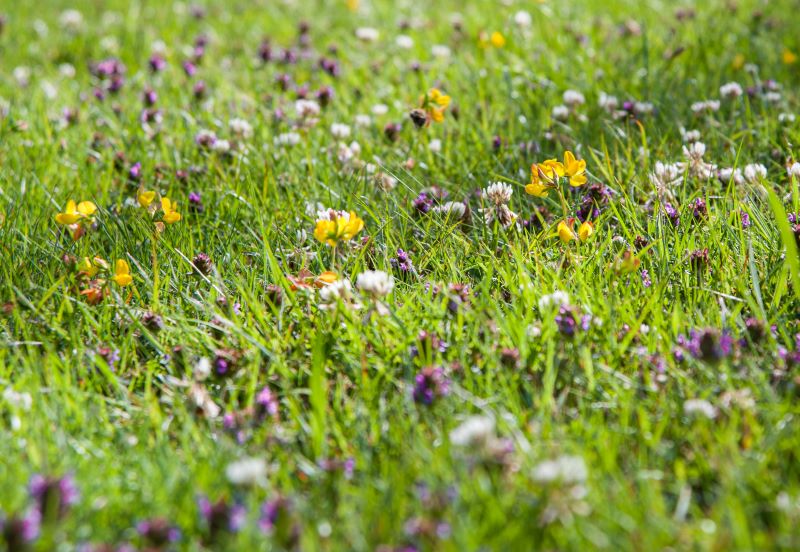 If you would like to join the growing number of people allowing a bit more wildness into their gardens, providing a ‘mosaic’ of habitats is the best way to attract the widest variety of species. Anyone can make a start by changing their old habits and mowing less often. Less work, less expensive, more variety! Some birds like a shorter area to peck around on, and cutting your lawn at 50mm allows for this, as well as encouraging deeper rooting which protects against browning in drought. If you can also keep an area of grass up to 80mm in height and then stop mowing completely during May you could get flowers such as lady’s smock, primroses, cowslips, clover, birdsfoot trefoil and self heal for the pollinators, as well as providing cover for small creatures. Another area left for longer grass, cut in late July, August, or September with the mowings removed, can become a mini hay meadow, a wonderful habitat for many wildflowers. (But watch out for hedgehogs if you’re strimming.) Winding mown paths delineating these areas is a good, ‘managed’ look to aim for. Experiment and edit to suit yourself. If people can also be encouraged to leave the verges in front of their property to grow a bit longer in Spring, the verges themselves become a green corridor. There will always be some who prefer the look of a close cut verge but, as long as there’s a living mosaic, the insects can move between flowery habitats up to 50m apart. Think how pollinator-friendly and pretty our village would become!

And while we gardeners are doing our bit to improve biodiversity, several of our Forncett farmers are doing the same thing on a bigger scale. Look out for new hedges, areas of plants providing seed for birds, and flowering plants for pollinators!

Other useful sources of information: