Death in Paradise: the Barn Owl

“The owl… pale on the gatepost

from The Warm and The Cold by Ted Hughes

One summer evening, watching television in the living room, I saw a reflection moving in the screen. Glancing out of the window in disbelief, I saw a Barn Owl flying past just a few feet from the window, clutching a hapless victim in its talons. A rare example of Death in Paradise playing simultaneously, both on and off screen.

In our five years living in Forncett, the Barn Owls have graced our meadow and the river valley. Seeing one is never less than a thrill. Occasionally, we see two together, sometimes one appears daily for weeks, at others weeks pass without a sighting. Now and then our worlds collide and an owl drifts silently in over the hedge. Seeing me only a few feet away, it gives its blood-chilling shriek, before veering off, leaving me trying to stifle my own blood-chilling shriek. And nothing beats the winter mornings when I drawback the kitchen curtains to find one sitting on the fence post at the end of the garden, lighting up the scene.

We presume they are a pair. Barn Owls don’t hold exclusive territories, so their home ranges overlap, but one of ‘our’ owls appears smaller and paler; a male, we think. It can be difficult to distinguish the sexes by size, but the slightly heavier female has darker feathers around the distinctive facial disc and small black spots on her chest. With their other-worldly beauty we should have named them after Greek gods or Shakespearian lovers, but settled more prosaically for The Big One and The Little One. 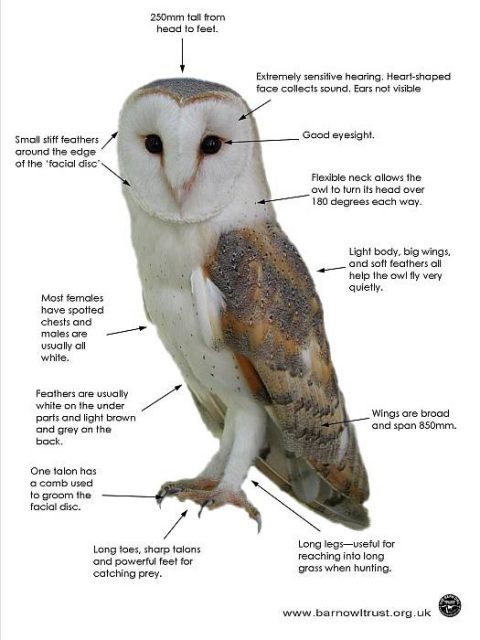 Of course that beauty is really a series of adaptations that make the Barn Owl into such an effective hunter. The heart shaped facial disc is designed to funnel sound into its (asymmetric) ears, whilst its light colouring is believed to allow it to hover without presenting the dark silhouette of a predatory bird. It has a very low wing loading, meaning its wings are disproportionately large for the weight of the body, allowing it to glide and hover noiselessly.

Barn Owls need rough, tussocky grass to hunt their prey, consisting mainly of field voles, wood mice and shrews, supplemented by rats. An owl needs to catch 3-4 prey items nightly and more for its owlets, meaning that a pair may need some 4000 prey items per year. Degradation of land through habitat destruction has reduced the availability of such grassland but we are fortunate that the Tas Valley retains areas classified as prime Barn Owl habitat. This year we followed The Barn Owl Trust’s advice, which recommends that grass should be topped only, with the cut grass left in situ to die off, forming a dense leaf litter, at least 7 cm thick, ideal habitat for Field Voles, which don’t live underground but need to burrow into the litter. Helpful for us humans too, as it meant that only our wild flower areas needed to be raked off.

All went well during Autumn. Shortly before Christmas, however, The Big One and The Little One just stopped appearing. It must be two months now since we saw them. Neighbours have confirmed there have been few sightings along this stretch of the river valley. Perhaps we are worrying unnecessarily. A Barn Owl range is considerable; in the summer it hunts within a radius of about 1km from the nesting site, but winter forces it to extend that range up to 4 km. So if, then its winter range is…is…well, it’s huge, about the area of 7,000 football pitches. So they could simply be hunting elsewhere. Although faithful to their main nesting sites, the owls may favour a winter roosting site providing good shelter or easy foraging. Sadly though, it is quite likely some misadventure has befallen them. With their low flight pattern – they like to hunt at around 3 metres from the ground - Barn Owls are susceptible to traffic accidents. Death by ingesting rats poisoned with bait is also common. The downside of those clever wing to bodyweight adaptations is that Barn Owls carry very little fat reserves and many die each winter from starvation. Their feathers are not well waterproofed and they find it harder to hunt in wet or windy winters. Adult Barn Owls have an estimated 70% chance of surviving the winter, juveniles only 40%. Or have they simply reached the end of their lives? The average life span of a wild Barn Owl is 4 years and I have been watching what I am almost sure are the same pair for longer than that. Only time will tell. All we can do is continue to manage our little piece of land in a way that is most helpful and hope that one morning we will draw the curtains to find our beautiful owl-or, at least, one of its offspring - once again sitting “pale on the gatepost”..

How can we allhelp Barn Owls? There are some precautions we can all take and increasing habitat for prey species is proven to be the most successful way to help. Try some of these: