The Extraordinary Life of Our Endangered Eels

The Eel is a fish, a vertebrate that breathes through gills with an unusual serpentine form. Their lifecycle is still, in the 21st Century, shrouded in mystery and remarkable. Its very existence is threatened and it is now a highly endangered species.

European eels (Anguilla anguilla) are born in the Sargasso Sea within the Atlantic Ocean whose boundaries are the powerful ocean currents. Vast clods of sargassum weed hang in the deep blue water over the “black abyssal deep: a place of utter stillness and silence”, as Tom Fort describes it.This seaweed provides nourishment and shelter for many creatures, the eel among them. Mature eels spawn here but nobody has ever seen one mating and no one knows why they breed only in the Sargasso. Nor does anyone precisely know how they navigate although their migration is such an astonishing feat – drifting and swimming on ocean currents and making their way into brackish estuaries and up the streams and rivers of Europe and the UK for up to 6,000km.

It is likely that they are steered by the moon and the earth’s magnetic field. The tiny larvae, leptocephalus, hatch from their parents’ fertilized eggs, slivers of tissue a few millimetres long and entirely transparent..These infant eels assume theshape of minute willow leaves with a pinprick head, round , black eyes and a pair of jaws. They grow quickly on a diet of micro-plankton but are too puny to swim, instead they float on the complex ocean currents It takes about two to three years for them to reach British waters where they metamorphose into translucent ‘glass eels’ about 7cm long. 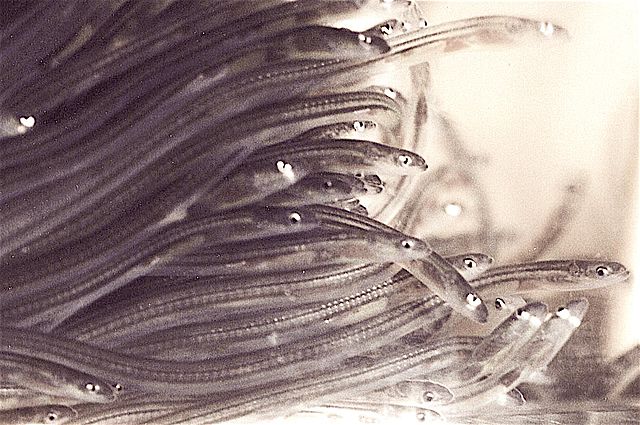 When the glass eels taste fresh water they metamorphose again.They adapt immediately to a freshwater existence and undergo further change into elvers, with darker skin and firmer flesh.They move through shallow, choked waterways or swift currents and, if necessary, slither across brush and grass to reach appropriate habitats: streams, rivers, ponds, dykes and meres. Their bodies grow strong and muscular, the gills are small and concealed and thin fins stretch almost the length of back and belly. They are covered in tiny scales not visible to the naked eye. Here for ten, fifteen or even thirty years they eat and grow, hunting at night. They are predators and useful scavengers and are termed yellow eels.

The eels that reach the Tas have come across the Atlantic and into Breydon Water, turning left up the Yare. The decline of this ancient snake-like fish has been dramatic. The eel population has collapsed horrendously since the late 1980s and it is in danger of extinction. We are erasing a creature that existed over 40 million years ago, that survived ice ages and has seen continents drift apart.

There is an Anglian Eel Management planthat tries to help eels survive. It assists them in getting round man-made barriers – sluices, weirs, turbines, pumping stations - that block their route. Trowse Mill has long been a great impediment to the eel journey up river and on their return down river to their Sargasso birth- place. In 2022 an efficient eel pass is to be engineered at the mill but it may be too late to save them. Other threats to their survival are the gross pollutants in our rivers and agricultural and water company abstraction. Surprisingly there is also destructive illegal trafficking, particularly of glass eels, between Europe, the UK and Asia where they are an expensive delicacy. The European eel is the most heavily trafficked species in the world. 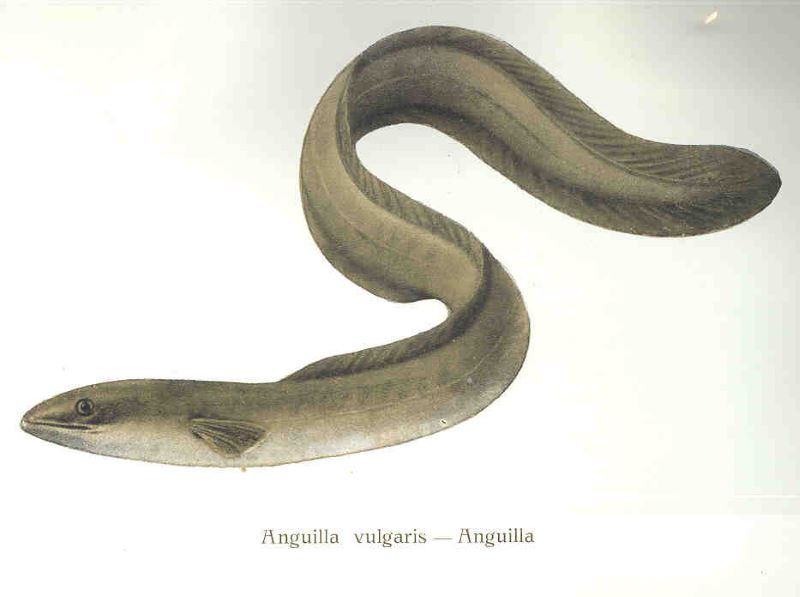 At the point that the yellow eels mysteriously decide to return to the Sargasso their backs and flanks darken and their bellies turn from yellow to silver; their nostrils dilate and their eyes expand. These argent-flanked fish are now silver eels. The thickness of the eels’ skin and its mucous coating make it able to withstand salt-water in combination with adaptive gills, blood and internal organs. So, it is able to swim down river and out to the sea. Eventually these extraordinary creatures reach the marine forest of their birthplace to spawn and die.

In North Norfolk the GlavenEel project, with a river just ten miles long, has worked to improve eel habitat; building eel passes, digging new ponds, clearing backwaters and working with landowners to slow the river with tree debris. They have also encouraged young people to take part – six schools have had an eel tank in the classroom so they could study and draw them and then release them into the Glaven. This has fostered respect in the community for this remarkable species.

The remains of prehistoric eel traps – stakes, woven fences and spears of bone and horn – have been found by archaeologists all over Europe. Eels were good to eat. Ely, the Isle of eels, was prodigiously endowed with these fish for centuries. The medieval abbeys and monasteries of the Fens took their dues in thousands of these fish, supplied by the marsh-men. The 14C Lutrell Psalter shows basketwork traps of green willow placed in a millrace to catch silver eels.

Ernie James of Wellney was filmed for a Bygones Special by Anglia TV in 1975. The programme was written by Geoffrey Weaver, to whom I spoke for this article, who interviewed Ernie throughout the year. He was possibly the last of the seasonal workers on the washes, living and working between three cuts of the River Ouse, as generations of his family had done, making his living from the land. The flat water meadows between the river cuts were designed to flood in winter and were grazed by cattle in summer as was common all over East Anglia. He cut osiers, the shooting branches of the pollarded willows, in Febuary. Once there was a huge demand for willow baskets but now he was cutting them only for his eel traps which he termed ‘hives’. Every river system had their distinct design of eel trap and he wove them inside a shed when it was rough weather, splitting the osiers with tools handed down to him.

The traps were ready for spring. May, Ernie declared, was the best month for catching eels: “when the worms come up in yer garden the eels is biting”. He said that there is a strong relationship between the eel and the willow and they enter the traps, tail first, quite easily as they like to suck the willow. The art is knowing where to set them, and Ernie set his from his punt, underneath certain willow trees, where he knew the eels were likely to lie, near the roots and the overhanging bank.

In summer he cut the banks with the long handled Roding scythe of the fens. When the widgeon arrived, on the flooded fields, he would take out his long punt with the muzzle shot gun on its bow, and lyingin the bottom he paddled towards the gang with short, spatula-like oars. Edging up on the birds he brought down over forty with one shot.

As winter struck, the washes froze and Ernie, who had been in training on roller skates all year, became a professional ice skater and carried off a great number of prizes at competitions all over the Fens.

The river Severn, once a huge source of eels is famous and remarkable for its elver run. Here a few hand net fishermen are still licensed, releasing 45% of their hugely declined catch for restocking projects. The Severn tide – known as the Bore –which funnels up from the Bristol Channel, takes one hour to reach its height and takes eleven hours on the ebb. The elvermen act after the high point of the night tide. The Bore has raced through with a mass of its water behind. Its dramatic surge ceases and for five minutes the river is still as a mill pond. Then there is a tremor that can be felt underfoot on the banks, and within five minutes the Bore retreats.

The baby eels have been swept forwardfor miles up river from the estuary, surfing the Bore. They now have to swim for their lives to maintain their progress and at this point the elvermen net them for an hour or two, until the ebb is too much for them and they sink to the bottom of the river seeking refuge.

The first Severn elverman to emerge by name in the history of the river is Thomas Pyrry from my ancestral village of Blaisdon, a few miles from Gloucester. He was a lawbreaker in the honourable tradition of the Severn communities, fishing in defiance of the laws laid down by Henry VIII and apprehended in 1587 with his elver nets, panniers, lanterns and poles. The Severn net is shaped like a cradle, with a handle from five to nine feet long, fixed to a headboard of elm at the narrower end.The net frame was of withy and the side strainers that kept the cheese-cloth netting taught were woven briar.

In this century although illegal trade continues eels are no longer fished for as food, with exceptions.I think with horror of my youth in the 1970’s when I went to East End shops with their mirrored walls and marble tables and ate eel and mash – smoked and jellied and served with parsley sauce. Some of these Pie and Mash shops still exist with eels sourced from the Netherlands and northern Ireland but a few from the Thames! We didn’t know then how we would decimate our wild life through ignorance, entrapment and pollution.

The European Eel regulation 2009 and the Rural Communities Act of 2006 are designed to protect them. There are some reports of glass eel numbers rising. In the Tas in 2020 the Environment Agency recorded a few more eels than in the previous two years. Some scientists, however, warn that even if the number of glass eels arriving in British and European waters is recovering, the scale of decline before 2007 was extreme. The consequence of that was much smaller numbers of silver eels returning to the Sargasso resulting in fewer eggs being laid, fewer leptocephali surviving the journey to Europe and fewer glass eels making their way to our inland water ways to begin the cycle again. There is no room for complacency and support for eels at a local level to help their conservation is vital.