The Importance of our Bumblebees

There is so much to say about bees that I am going to write, rather generally, about our 25 British bumblebees and leave our 200 beautiful solitary bees and our domesticated honeybees to a later date.

Bees are the most important pollinators on earth. Without bees and other insect pollinators most plant life would cease to exist. Our life on earth is threatened by their decline.  Most of the bumblebee species are familiarly stripy or have red or buff tails. The Early Bumblebee, Bombus practorum, is relatively small with a rich burnt orange bottom and hopefully may appear in your garden from February onwards. They are beautiful insects with rounded hindquarters and furry coats.

Significant changes in farming practices since World War Two account for major decline in numbers and species of bumblebees: the move away from hay meadows and their diverse flowering plants, the end of rotational cropping that ensured flower-rich bee forage and modern grassland monoculture. On top of this came the widespread use of chemical fertilizers and pesticides that kill and injury insects and compromise their fertility.  Just three years ago the UK government acknowledged the harm that pesticides do to bees and other pollinators. Neonicotinoids are banned by the EU because of the harm to bees and to worms in the soil as they wash off the crop, but now our government have allowed licenses for these harmful pesticides on some crops, mainly sugar beet. 300,000 people signed a Greenpeace petition asking them to reverse their decision. They will not use the chemicals this summer, but have not agreed to ban them, even though they threaten the survival of bees and other insects and ultimately us.

Widespread action by farmers, landowners and gardeners like us can help the bees.  Two 6m x 100m strips within each square kilometer of farmland planted with mixed flowering plants gives a vital lifeline to bumblebee species (Edwards and Jenner).  What our wild bees need is a landscape with a wider variety of flowering crops to provide a nurturing continuity of nectar supply: beans, vetches, sunflowers and fruit trees. This is what some ecologically conscious farmers, like Jake Fines, manager of the Holkham Estate, are beginning to incorporate into their farming model.

There is no space to talk about each bumblebee but there is a wonderful description by naturalist S Hudson of an encounter with the beautiful Buff Tail also known as an Earth Bumblebee. She finds a Queen ‘crashed’ in the vegetable garden. She must have recently emerged from hibernation. Hudson delicately places her on a tea towel with a drop of sugar syrup near by. “Her antennae waved her mouth parts gaped, she flipped forward a slim proboscis from under her head. Its outer sheath opened slightly and a long gingery tongue appeared which she plunged into the syrup…she began to power up and vibrating like a helicopter she was away.”

Reverend Wood, whose beautifully illustrated book ‘The Common Objects of the Country’ I found in a Forncett jumble sale, referred to the Buff Tail as “the Common Humblebee that burrows in the ground and there builds its thimble-like cells.”  His book was presented as first prize in the Moulton Sunday School Window Gardening competition in 1878, in the days when these handsome insects, named for their droning hum, really were common objects. He has a lovely drawing of a Mason Bee remarkable for “…the beautifully tufted extremities of its middle pair of legs and a of a Red-hipped Humble Bee which makes its nest among stone heaps. He refrains from giving the North-country name of Red Arsie. 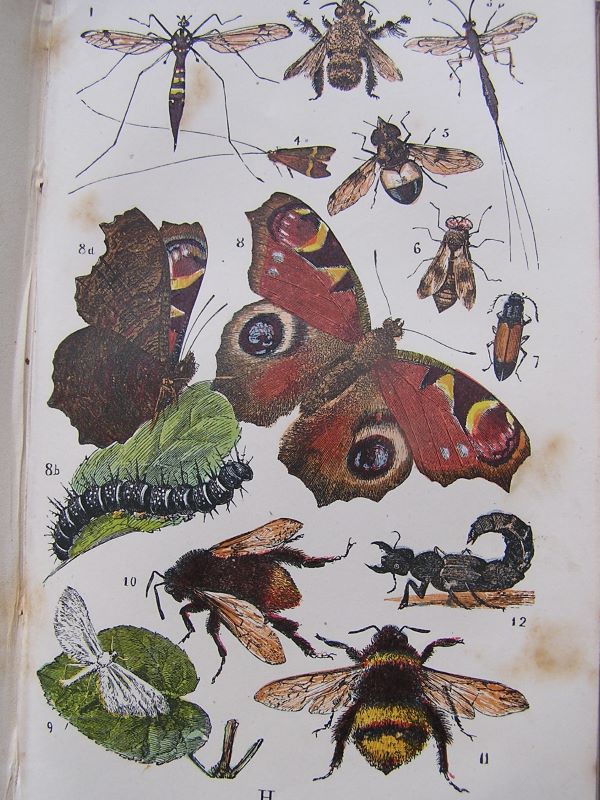 The Bumblebee year begins with the emergence of the first Queens waking from hibernation in the spring, as early as February or March in warm weather, later this year! They have been dormant for eight months and they are hungry.  Pussy willow trees may be one of the few plants blossoming. They are sallows and the female flowers are a greenish silver, producing sugar-rich nectar. In the fields behind Silver Green I found such a tree alive and humming with wild bees, including bumblebees, boosting their energy after their long winter sleep. The male pussy willow produces bright pollen bearing catkins and it was likely that the queens would be heading for these next to secure protein rich pollen.  The queens slowly fatten, the dormant eggs inside them begin to develop and they start to look for nest sites, quartering the ground if they are Buff-tail, flying along hedge bases, grassy truf and banks, exploring rabbit and vole holes. Early Bumblebees will nest high up in old bird’s nests, the Tree Bumblebee in holes in tree trunks.

The bumblebee, in whatever site she selects, builds a cosy ball of moss, leaves or dry grass with a hollow centre. She constructs a thimble shaped cup from her wax glands that she fills with honey. She also selects pollen and firms it into small pea-sized balls. Into these she pushes a batch of eggs, each fertilized with stored sperm as they pass out of her body. She seals the wax balls and incubates her eggs like a bird. She buzzes her wings to keep the eggs at about 30c even when it is freezing outside. This uses a lot of energy and she sips the honey she has placed nearby. On fine days she has to search for more nectar rich flowers to keep going. The quality of the nectar and pollen sources are critical for rearing the first brood. After about four days her baby grubs hatch and feed on the pollen dough that the queen replenishes. The grubs shed their skin several times until, when the size of broad beans, they spin themselves an oval cocoon and eventually emerge as bees, biting and bursting through the pupal skin!

The first bees are the bumblebees daughters and will become her workers. They feed the grubs, gather food, keep the nest tidy and build new cells. They also feed the queen who now remains in the nest laying eggs. If there are plenty of flowers nearby the nest may grow into a sisterhood of several hundred workers bees. At this point the queen changes her strategy, laying both male and female grubs. The female grubs develop as future queens, slowly becoming large bumblebees, perhaps a hundred or more of them. The males are smaller, similar in size to the workers and doomed to a short life.

In high summer the males cluster on flowers, such as thistles and knapweed, drinking nectar. In early or mid-summer they mate with the virgin queens, but they do not survive the cold, nectar-less winter. The mated queens, on the other hand, go into hibernation, seeking out a site in loose soil, hollow plant stems or compost heals. These queens are the hope for the future, because by September the founding queen will be dead, her nest decaying, the honey pots empty and the workers desiccated. Her job is finished. If all goes well many of the young queens will emerge in the spring to carry on the cycle of these beautiful and useful creatures.  Bumblebees have perilous lives: a local friend witnessed a foraging Buff Tail stalked and aggressively intercepted in flight by a black and yellow Conopid fly. These flies insert their eggs into the bee’s body and when the larvae hatch they feed on the bee and kill it.

In order to help all kinds of bees we need to plant bumblebee friendly flowers and establish forage and nesting areas in cities, villages, allotments and gardens. A scatter of abandoned allotment plots are good for bumblebees and we could all try to long, undisturbed, tussocky grass and earth banks for nesting sites and allow some ivy to grow.  Bees are dependent on an adequate supply of the right kind of flowers throughout their flight season from late February to October.

Traditional cottage garden flowers are very useful for bumblebees; many are related to native species such as foxgloves, honeysuckle, campanulas, scabious, poppies and cranesbill. The dead nettles, pulmonaria, plum blossom and rosemary are important early sources of pollen and nectar as well as hazel and willow catkins. Red and white clover and vetches are important later on. Marjoram, rose and wood sage are also useful and in September and October dahlias, particularly the Bishops, ice palnt, ivy, michaelmas daisy, chrysanthemum and nasturtium.

‘A Sting in the Tale: My Adventures with Bumblebees’, Dave Goulson, 2014

‘A Field Guide to the Bees of Great Britain and Ireland’. Mike Edwards and Martin Jenner, 2009