The Private Lives of Bats

Written by Mike and Pam Merrick.

On warm summer evenings if you go into a garden or a nearby field just after sunset you’re very likely to see a bat out hunting for its dinner. Bats are really remarkably common. The UK has 18 resident species, which make up a quarter of all our mammal species. At least 9 bat species have been recorded in Forncett, the two commonest being the Common Pipistrelle and the Soprano Pipistrelle.

As with many nocturnal animals, it’s easy not to appreciate how interesting bats are and what an important part they play in the ecosystem. In the UK, bats usually fly only between the months of May and September, when the night-time temperature is 9°C or above. At night, bats take over from birds and play a key role in controlling the levels of insect pests. One Common Pipistrelle can consume over 3000 insects in a single night! 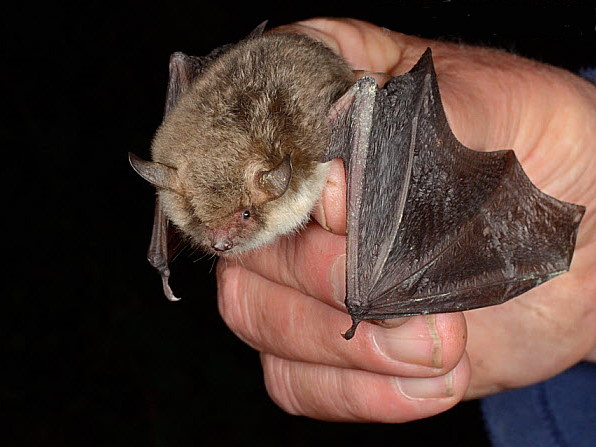 Natter's bat: this species has been recorded roosting in St Peter's church, Forncett (2021). Photo: thanks to Nick Upton

Bats use very sophisticated echolocation to find their prey when feeding, and their resultant acrobatics are quite remarkable to watch. The bat emits high-frequency sounds and then listens for the “echoes” which give them detailed information on size, range, position, speed and direction of a prey's flight. This amazing ability means that the “old wives’ tales” about bats getting tangled in people’s hair are unfounded. Indeed, a bat will no more fly into you than it will fly into a tree or a brick wall!

During summer, bats roost during the day, usually in buildings or old trees, but they will also use man-made bat boxes. They won’t necessarily use the same roost every night and can fly considerable distances in search of food. In Britain all bats and their roosts are legally protected. So, it’s a criminal offence deliberately to take, injure or kill a bat, or intentionally to disturb a bat in its roost. If you think you have bats roosting in your roof you will need professional advice before you do anything that might affect them. However not all protection is useful or necessary. The special “bridges”, costing £350,000 each, that are supposed to help bats cross the A11 near Elveden, have been scientifically demonstrated not to work but they were still installed again on the NDR!

In May, female bats form maternity colonies, and in June they give birth to a single pup, about 2.5 cm long. The pup feeds on its mother’s milk for around 6 weeks, by which time it begins to catch insects and the maternity colonies disband. Males and females mate in September, and from October through to April they hibernate, occasionally flying on warm nights in autumn or early spring.

There’s still much that we don’t know about the private lives of bats, but in Norfolk the British Trust for Ornithology in Thetford has been conducting an annual “citizen science” survey of bats since 2013. Using special microphones, set up to record overnight, they can record the bats’ calls which differ for each species. To date, they have analysed nearly 2 million recordings, making Norfolk’s bats the best studied in the UK (for details see Norfolk Bat Survey ). This has led to a much better understanding of the distribution and movement of different species. We’ve learned, for example, that some species migrate across the North Sea to the continent in autumn and return in spring.

So, whilst bats have often been quite unjustly associated with evil, vampires, and haunted houses, in truth they are superb flying machines that form an important part of our ecosystem and need our protection.