Swifts, the Supreme Aerialists and How we Might Save Them

Swifts are the consummate specialists of flight. They feed, sleep and mate on the wing – the only bird to do so. Over their life span they are likely to fly the equivalent distance of going to the moon and back three times. To wash their beautiful, dark feathers they seek rain clouds and fly through them slowly, their scythe shaped wings outstretched. They drink by gliding over lakes and rivers and taking a sip from the surface. 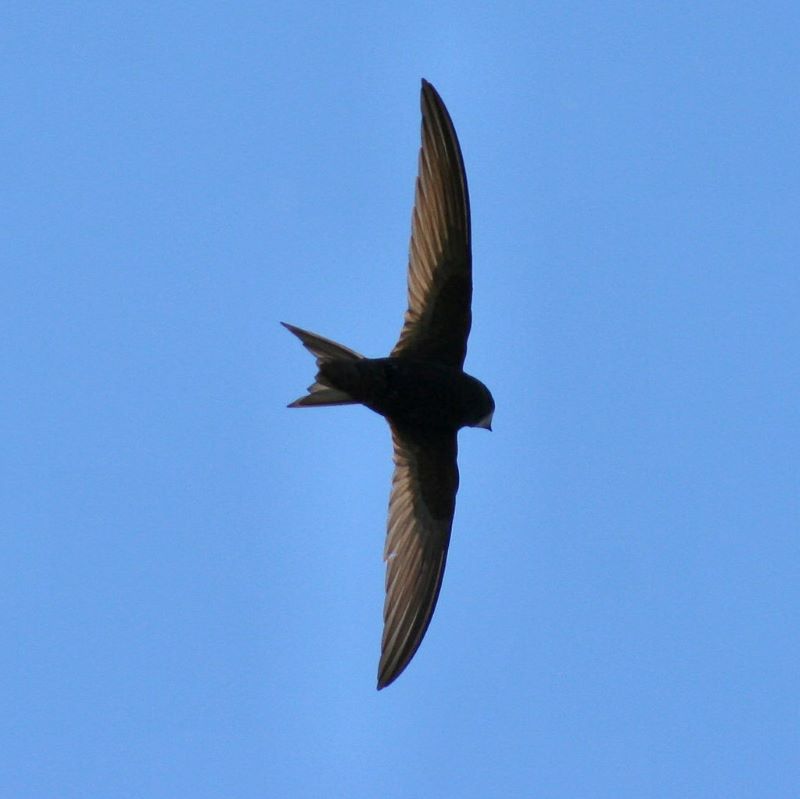 Swift in flight.  Photo: Thanks to Wikipedia commons

The swift belongs to the Apodidae family, Greek for footless. Of course they do have feet, but use them very little in their extraordinary lives. Young swifts tip themselves from the nests without using their feet, starting their migration flight of 14,000 miles they may fly continuously for two or three years. The birds fly to and from the very centre of Equatorial and Southern Africa using routes we still know little about. In late summer you might be lucky enough to see them heading South or South East.

Young birds roost on the wing circling for hours in the cold night air at high altitudes. They have prepared in the nest for their dramatic flight by doing feathery press-ups; lifting their bodies up from the nest by pressing down on their wings.  Swifts can ‘snooze’ on the wing in a unique adaption known as a unihemispheric state. They switch off one half of their brain while the other remains alert to wind and weather. A French pilot on a reconnaissance mission in the First World War, flying by the light of the moon, saw below him a cloud of sleeping swifts at 10,000 feet.  The cry of the swift is intense and thrilling. Some people refer to it as a scream, but although raucous it has a marvellous, lyrical quality of communication, quest and celebratory energy. Once it is heard it is never forgotten.

Swifts are with us for just three months. A friend in Forncett St Peter told me she waits with excitement for them to arrive at the end of April, as they have done for the last forty years. The returning pair, mated for life, dive into their feather-lined nest under the roof tiles each spring. She loves their cry and is enchanted by their swooping flight with incredibly fast wing beats and then long sailing glides, motionless against the wind.

The Apodidae is a very ancient group of birds that separated from all others sixty five million years ago at the point when Tyranosaurus was dying out. They are the swiftest of all birds with their top speed recorded as 111.6km per hour, nearly 70 miles per hour. In flight the forked tail is closed to a point for extra efficiency. They have deep set eyes with moveable bristles in front that act as dark glasses against the glaring, equatorial sun. They are related to humming birds.

In wet weather swifts will fly around storms to find dry areas in which to hunt their insect prey. Their chicks have a remarkable adaption that helps them survive in wet weather when insects are scarce – they can go torpid and cold for several days - until their parents are able to bring food again when they rapidly gain weight and temperature. The parent swifts need to gather as many as a hundred thousand insects a day, storing them in their throat, to feed their chicks. They eat flying insects: aphids, mosquitoes, small beetles and flying ants.

These remarkable and mysterious birds have shared our buildings for centuries. But not for much longer unless we act quickly to help them, because modern and renovated buildings usually exclude them.

The decline of the swift, a protected bird has been alarmingly rapid but can be halted or even reversed if we act to provide them with places to nest.  Some local authorities in the UK who have taken direct action to maintain the biodiversity of their areas and sustain birds have worked with architects, builders and developers to put in swift bricks and provide tiny spaces for the birds to nest in. These are low cost projects that just need thought.  In Ely a city councillor initiated the siting of five swift nesting cabinets in the belfry of Ely Cemetry Chapels with room for fifty nest boxes and a tweeter playing swift calls to alert them.

Four years ago the near by town of Harleston initiated a project to save the swift. It was done in close collaboration with the Primary School whose Eco Group wrote home to all the parents about the possibility of making and putting up swift nesting boxes and attracting them with swift-call speakers.Parents joined in and boxes were made. All sorts of people from the community with diverse skills and enthusiasm supported the initiative. The children made a marvellous mobile of 420 swift shapes with messages written to the swifts on their phenomenal journey and African flags incorporated. It was proudly hung in St John’s Church and gradually the swift population of Harleston revived.

Local initiatives can ensure that swifts remain in our environment and that their superb flight can be witnessed by our children and grandchildren. Could the Forncetts help to maintain the presence of these superb aerial creatures in our skies?