Photos of the Murder Mystery play 'Murder at the Village Hall' on Saturday and Sunday 18th and 19th February 2017. 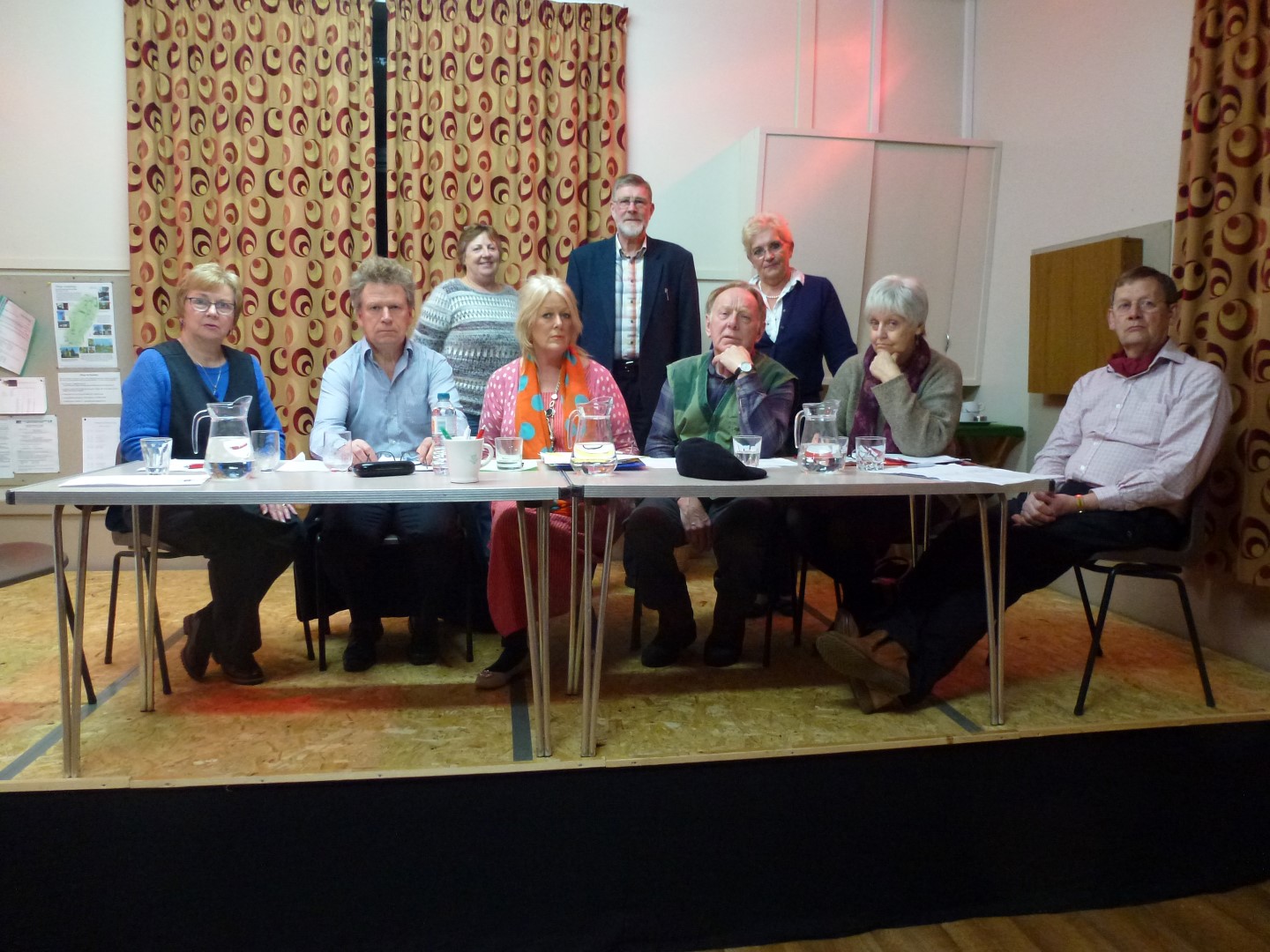 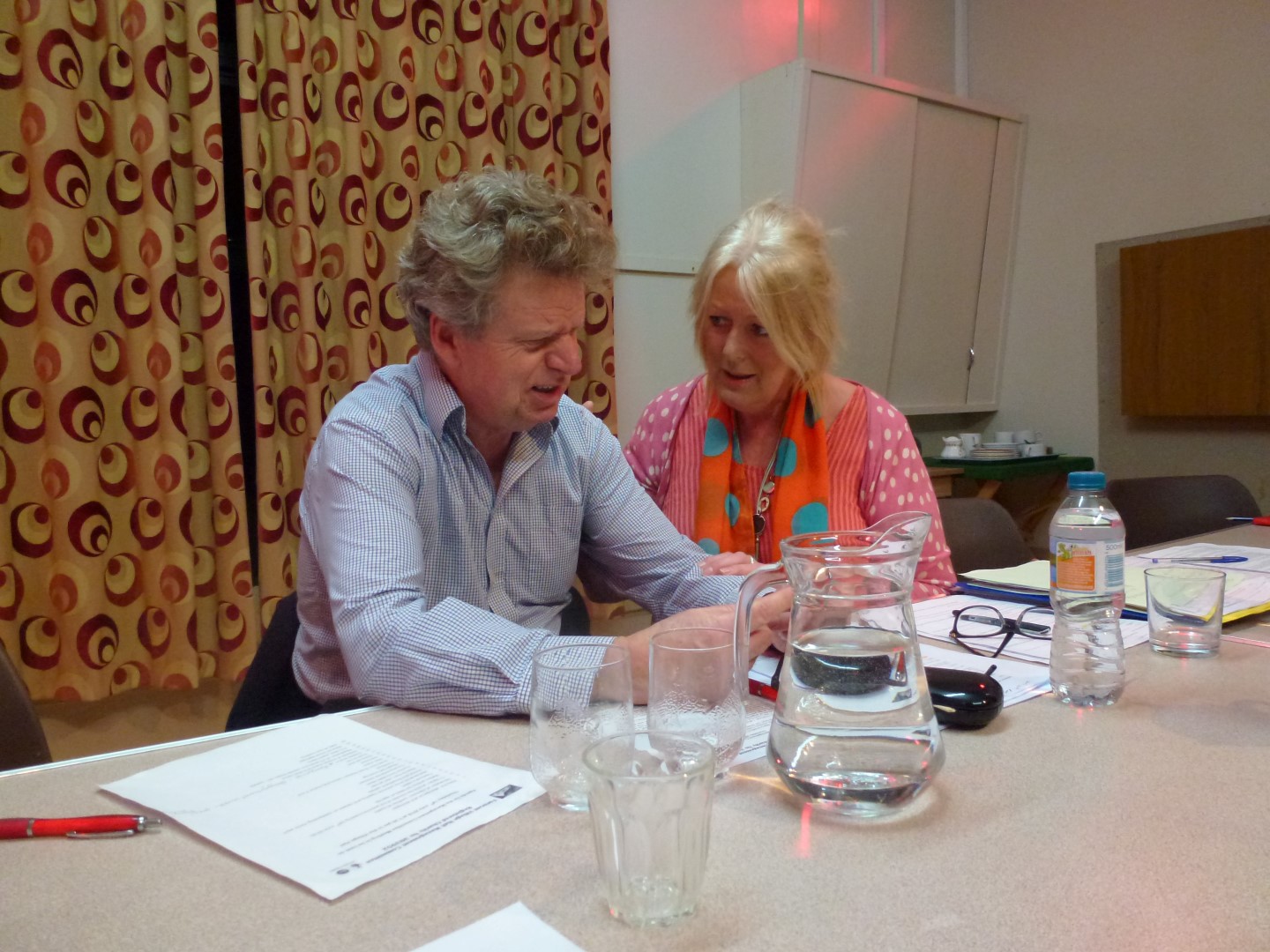 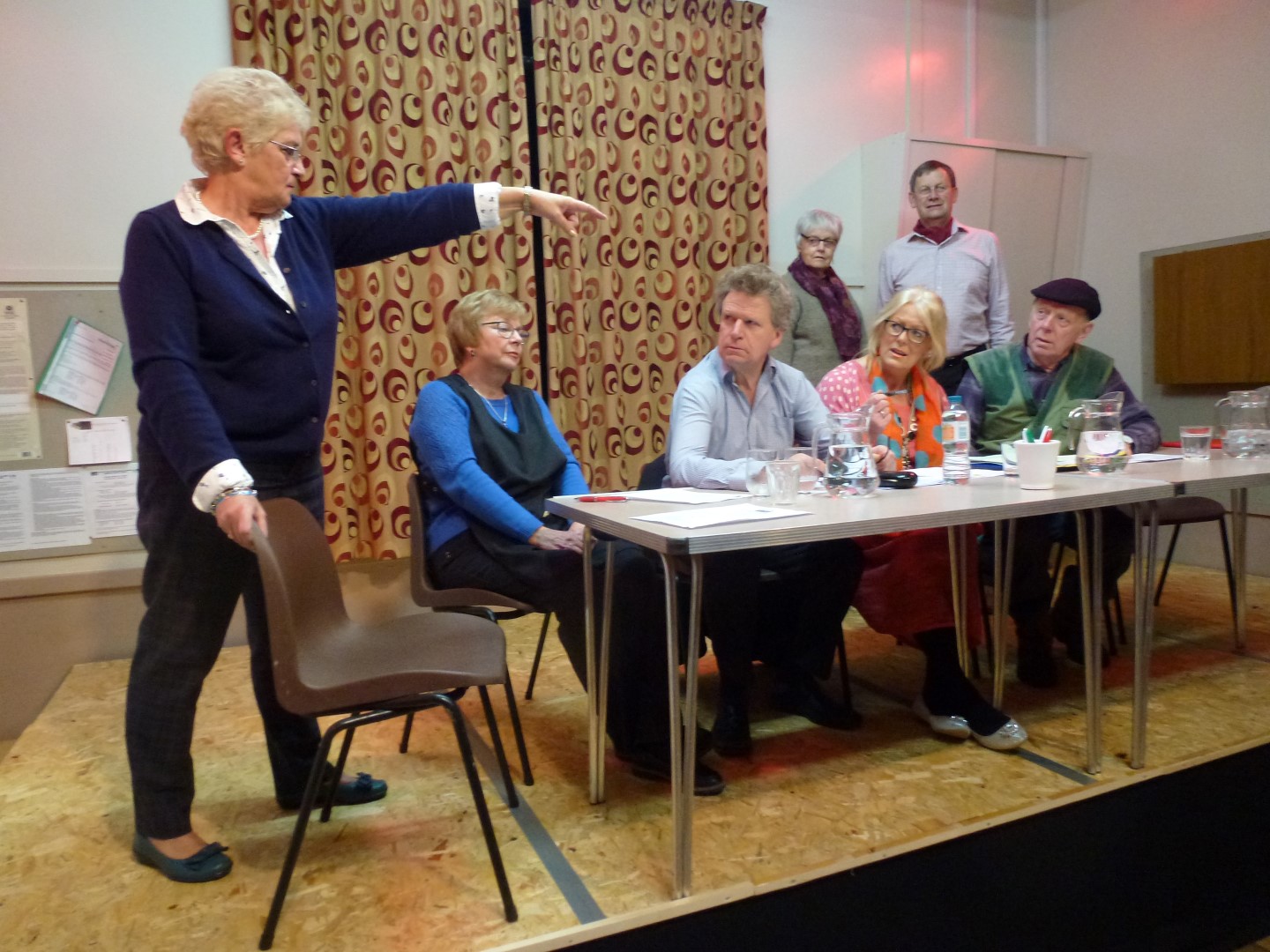 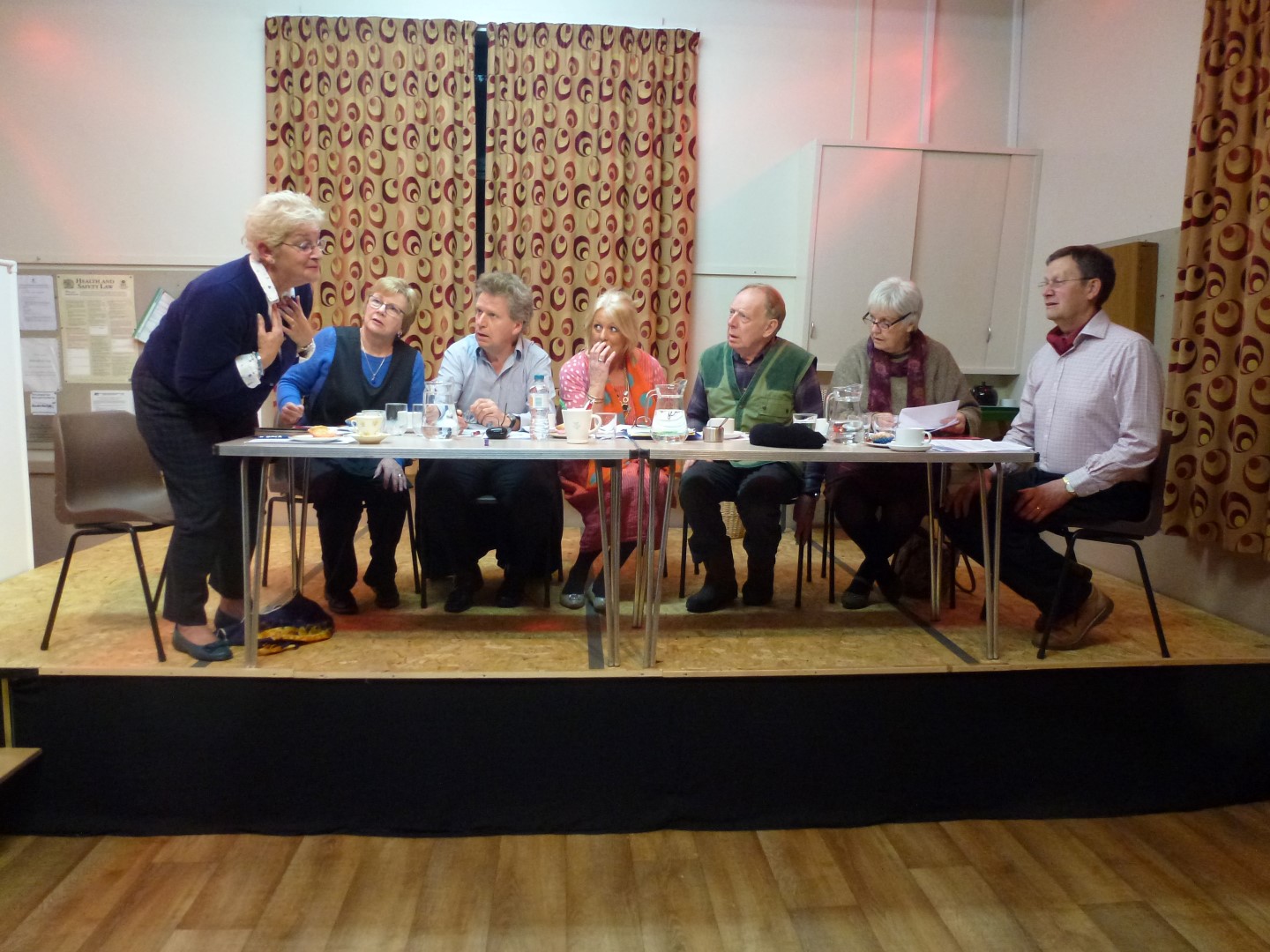 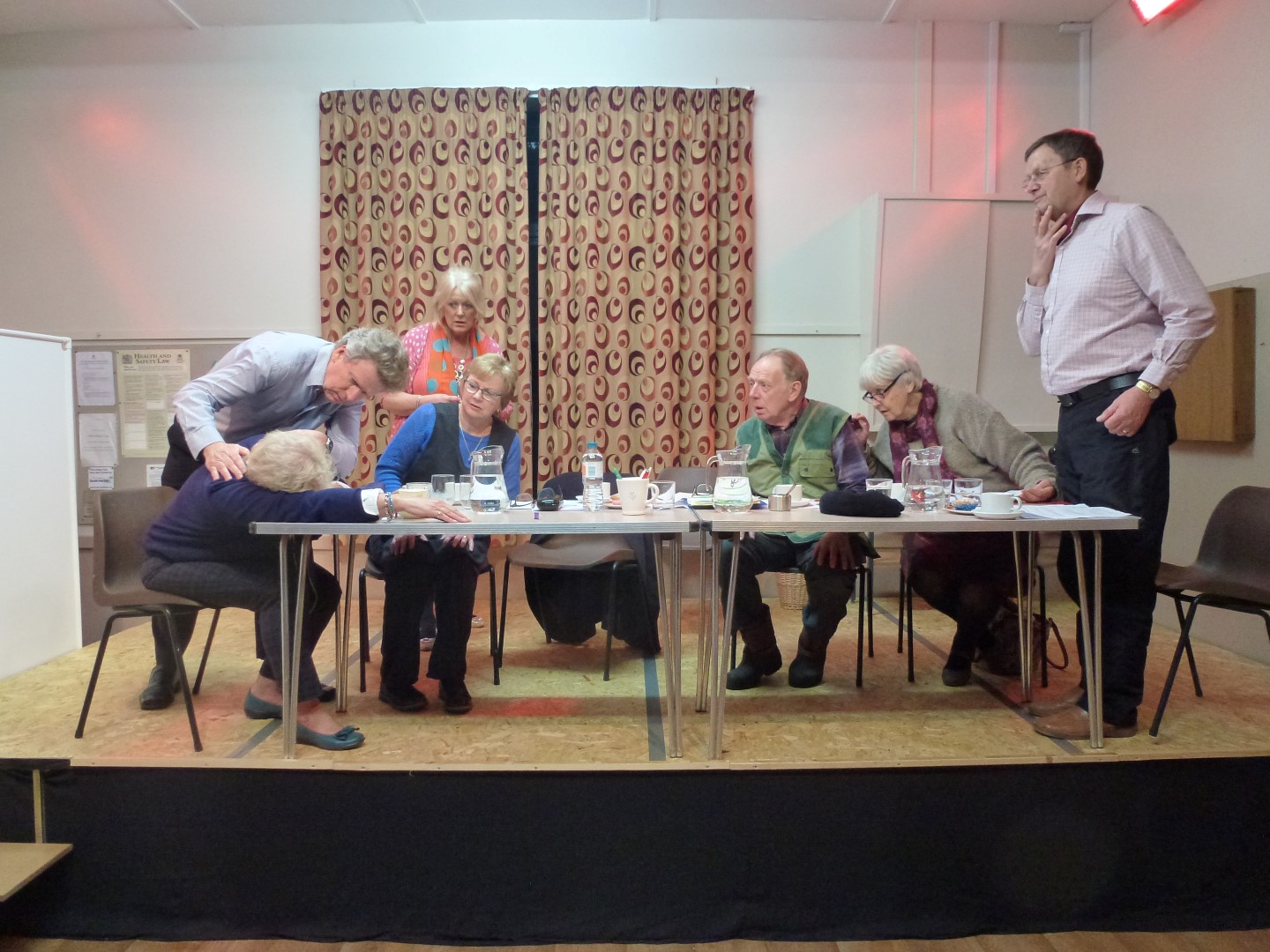 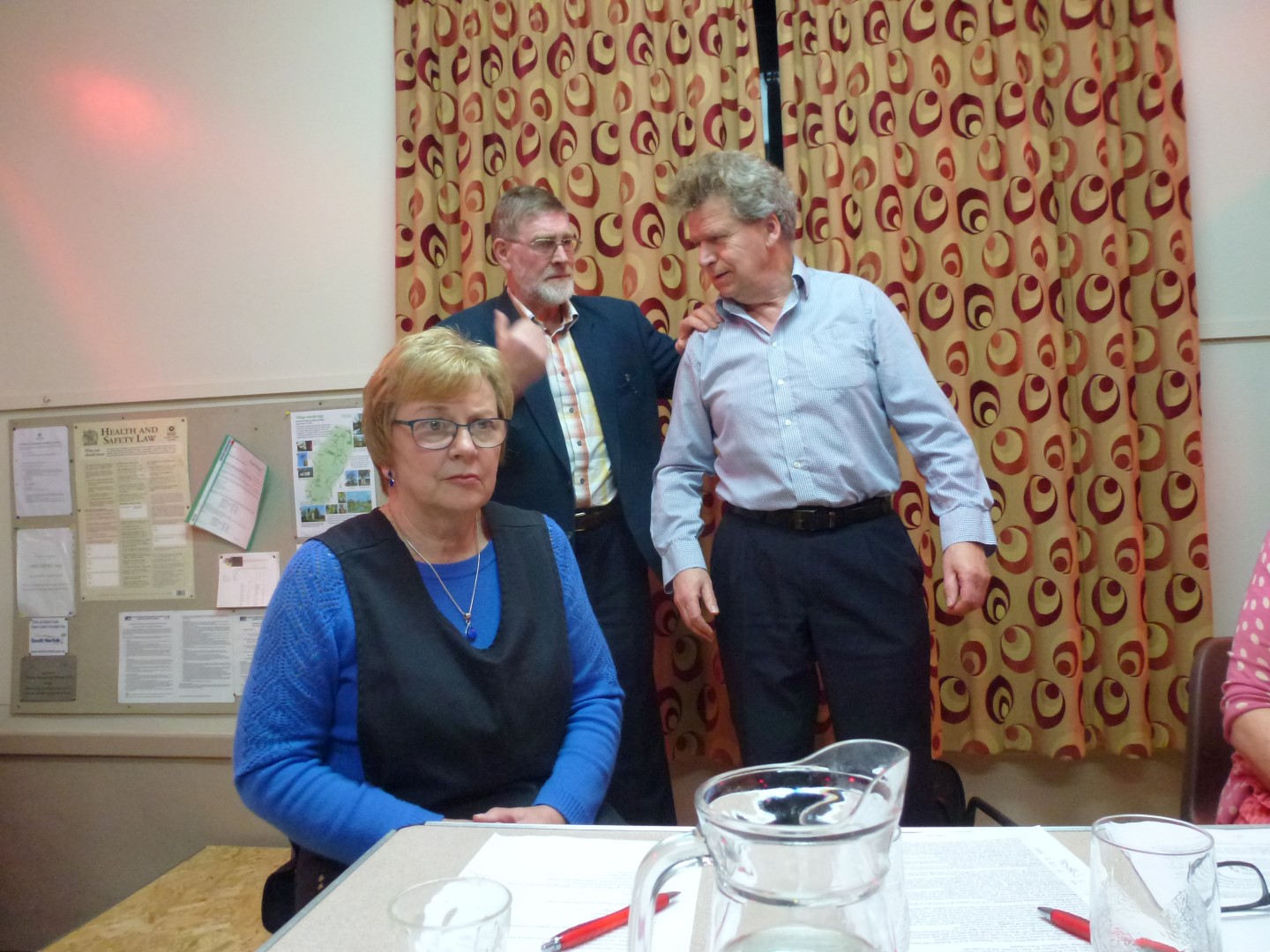 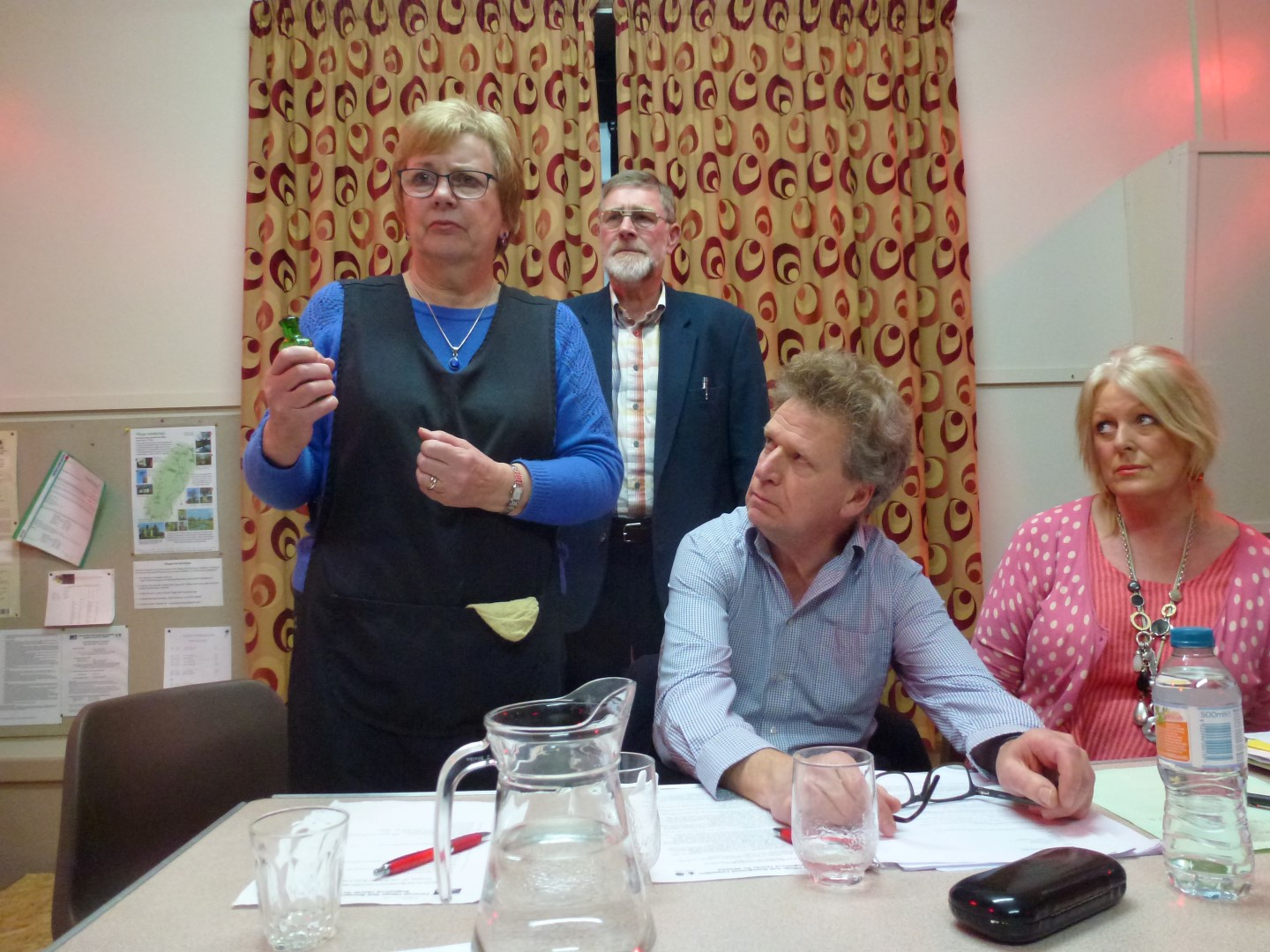 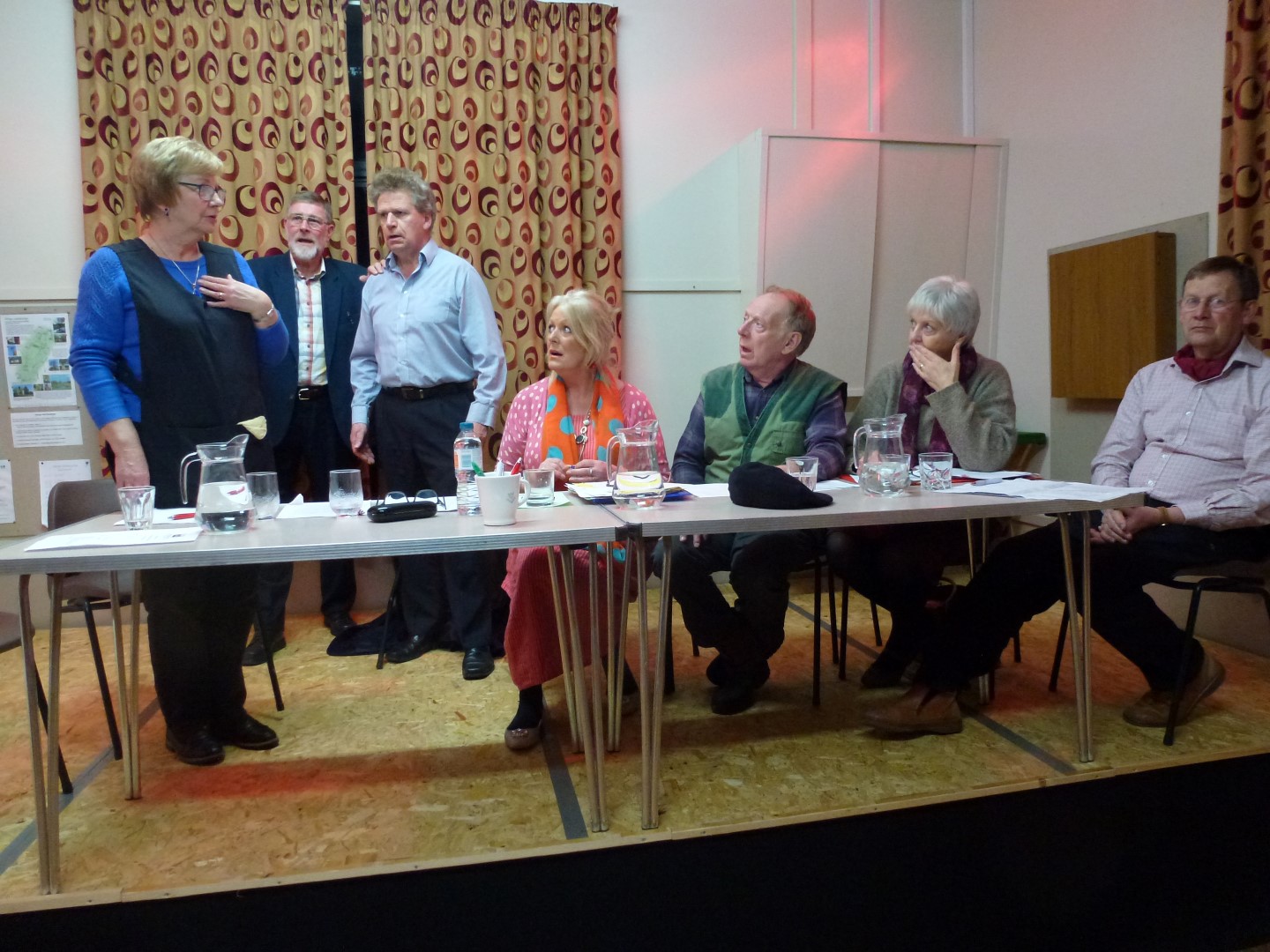 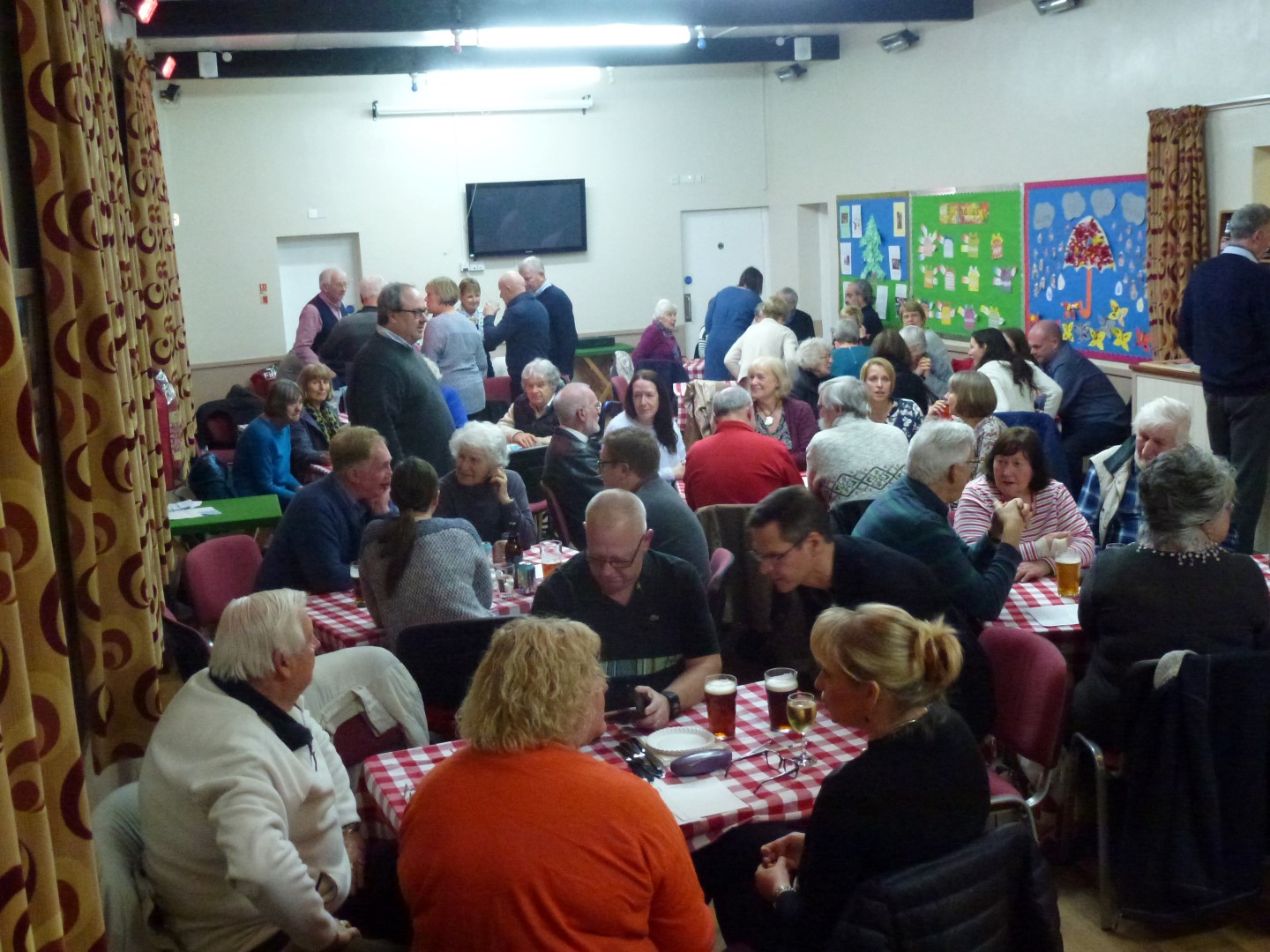 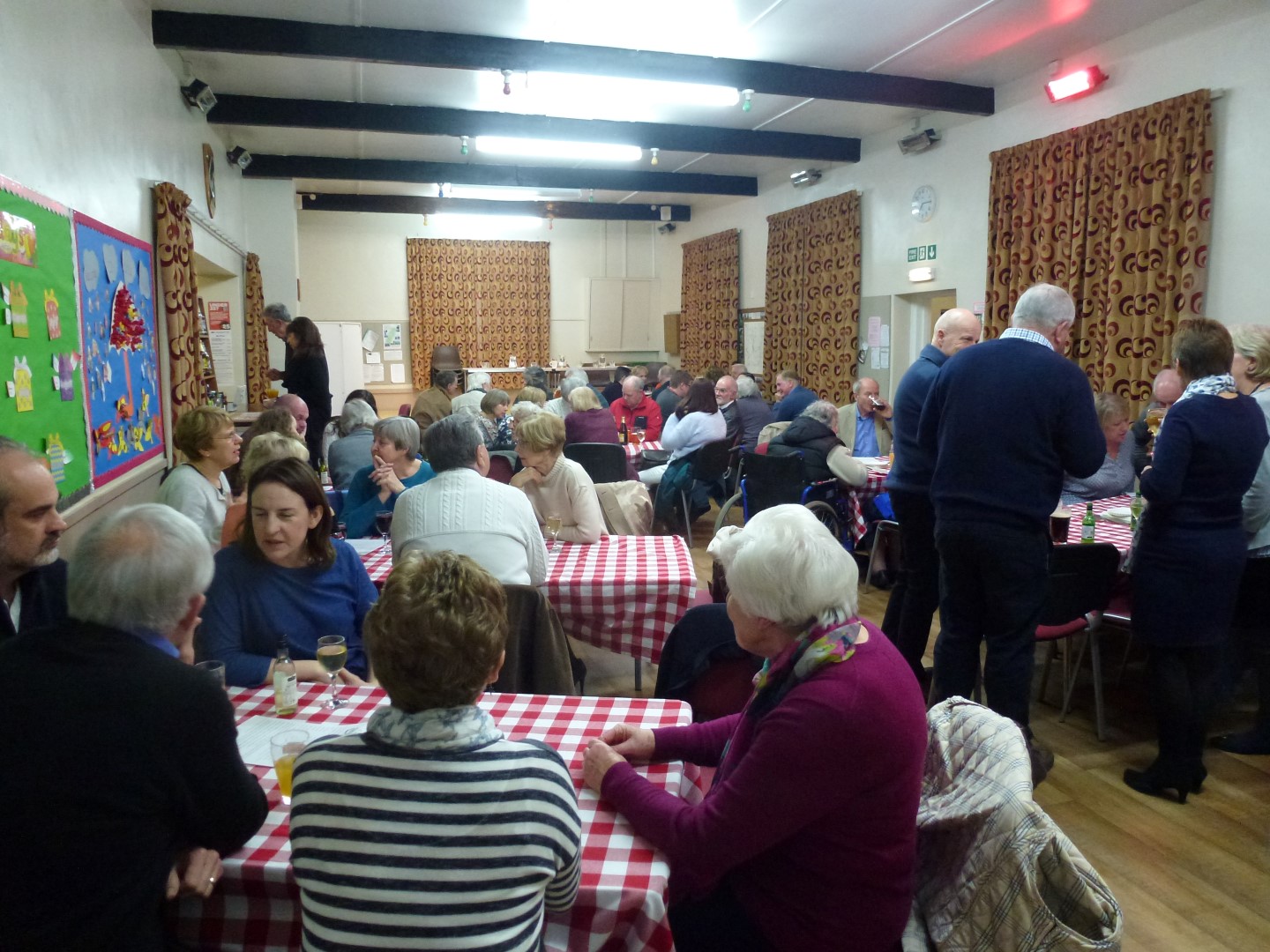 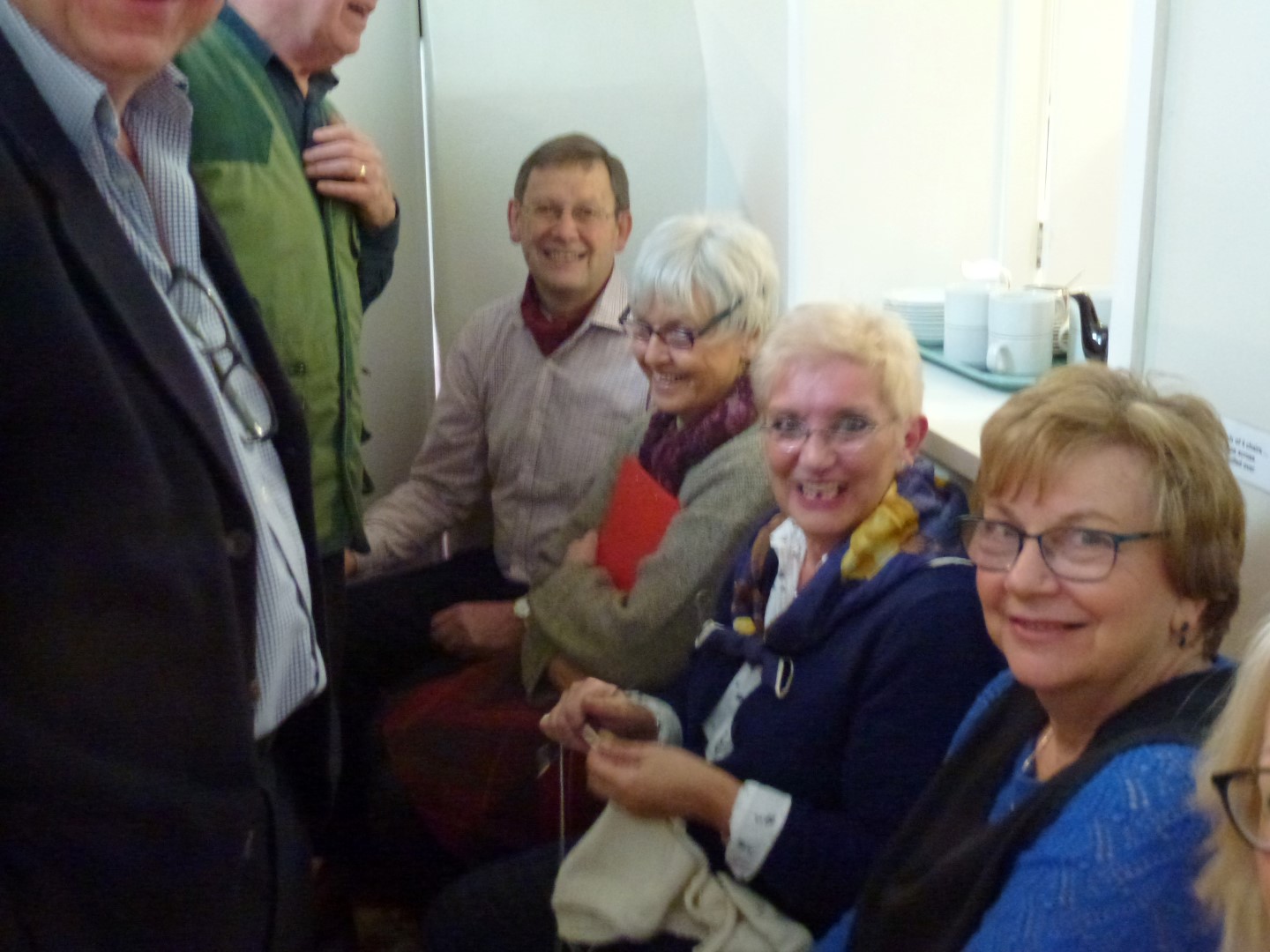 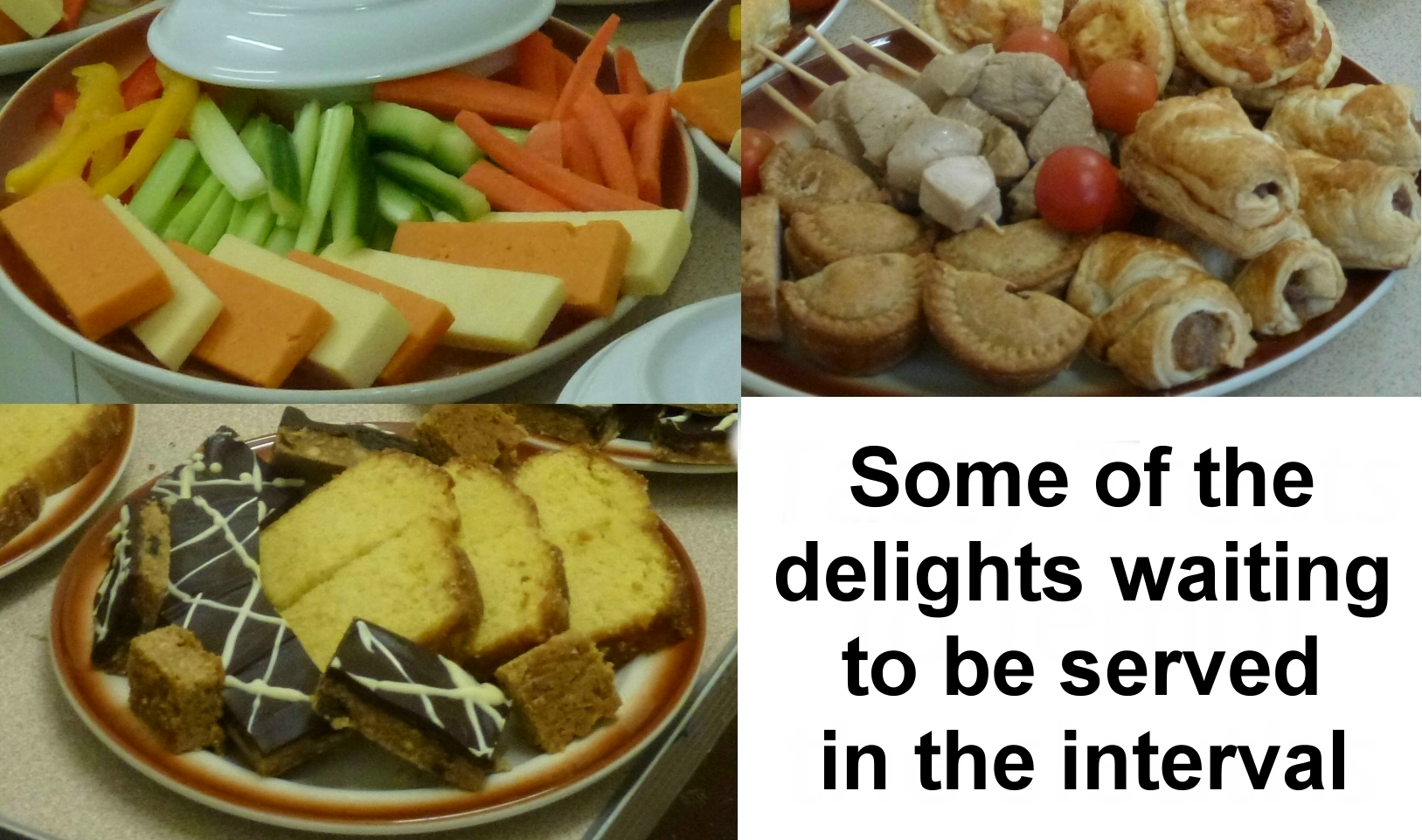 An execrable and heinous crime was committed in full view of the good citizens of Forncett in the Village Hall on Saturday 19th February. So well disguised was the crime and its motives that all those ‘committee members’ present came equally under suspicion when the chair, Lady Lavinia Forncett played with appropriate haughtiness by Sarah House, met her untimely and noisy end. A suspiciously well-crafted Murder Mystery co-written and produced by April Carlin and Gill Starkie kept the packed audience fully engrossed and guessing until the very end. Motives including sibling revenge, eviction and debt and the suggestion of some sexual dalliance all served to obfuscate the resolution of the crime. Red herrings abounded and even Inspector Halfpenny with his razor like intellect, John Wilde, failed to identify the killer despite all the help he received from the audience.

All the suspects were played with conviction and aplomb by the cast: Graham Gale as the ‘wet’ and down-trodden Lord Hugo Forncett; Peter Schmidt-Hansen was the poisons expert and, verging on the neurotic, scientist; Lady Forncett’s suspiciously loyal long serving companion played by Jackie Smith; the financially compromised tenant farmer by Brian Frith; Gill Starkie was the flamboyant homeopathic healer with a penchant for getting her hands on Lord Hugo and April Carlin as the personable and keen to please widow of the faithful Hall gardener who in the end turned out to be the individual with the fatal character flaw and access to all those nasty garden chemicals banned by the EU.

As well as the entertainment the audience enjoyed a plentiful cold buffet served with great efficiency in the interval and the Tas Bar was well patronised as usual. Forncett Village Theatre Productions and all those involved are to be congratulated on presenting this absorbing mystery play and you are recommended to book early for the next murder mystery with a haunting twist planned for 14th October – but do be careful when you’re drinking your tea!

Many thanks to April Carlin for writing, producing and directing this play especially for the Village Hall, and to all the cast for their sterling efforts. Thanks also to the many others who helped produce and serve the food, staff the bar, 'front of house', assemble the stage and screen - and clear it all away in record time after the Sunday performance ready for Little Tractors Playgroup on Monday morning. We are also very grateful to Forncett School for the loan of their staging, without which the audience would have had a much impaired view. By popular demand (i.e. the audiences) it is hoped that there will be another one in October. Over the two nights approximately £550 was raised for Village Hall funds - helping to maintain and improve the Hall for all users from so many sections of our Community.