One can spend hours just studying the pew ends! 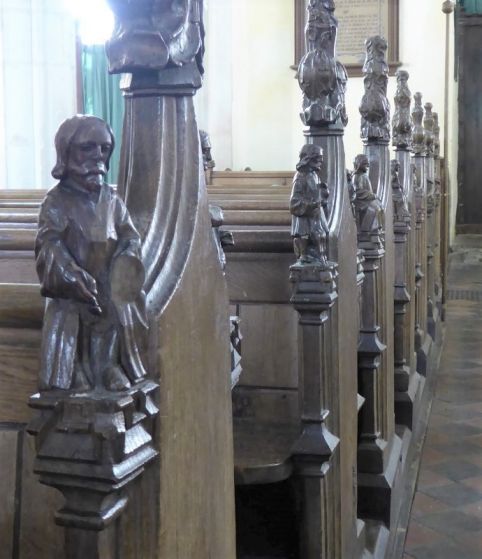 They were carved in the 15th-century and heavily restored in the 19th-century, representing Saints and Apostles (St Peter and St Paul, to whom the church is dedicated, are here), as well as the Seven Sacraments of the Church (look for Extreme Unction, which involves anointing and comforting the dying), personifications of trades and occupations (such as the huntsman with his falcon) and the Deadly Sins: can you find the greedy miser with his coin box and a surprisingly friendly-looking devil at his feet? There are puzzling figures here too: for example, can anyone guess who the lady in a little house is – is she a medieval hermit in her little cell? Some of the figures look new and shiny, and others appear to have been damaged. This means that the former are likely a result of Victorian restoration and the latter are medieval and either got damaged naturally over time or were mutilated deliberately after the Reformation, when imagery in the church was considered unacceptable.

Today the long handled scythe is experiencing something of a revival. It is useful for patches of long grass, weeds and flowers and meadows. Used by Wildlife Trusts who sometimes gives lessons in its correct use, its popularity is growing. Among the beautiful carved bench ends of St. Peter's is a series of carvings showing farming through the seasons. The first shows the sewing of the seed. The seed bag from which the seed is broadcast hangs from the farmer's neck, his hand taking the seed from within. Another figure is seated, and there, resting against his knees, grasped firmly in two hands, along the finely carved folds of his flowing gown, is a long handled scythe, with the immense curved blade ready for the sweeping action needed. These figures were first carved in the fifteenth century. It looks from the clothes carved on the figures as if they depict a time even longer ago than that.   So, between 5 and 600 years separate the scythes familiar to farmers then, and those used today. Of course experts would argue that improvements have been made. The steel may be more finely tempered and other technical advances made, but essentially, it is the same simple tool. 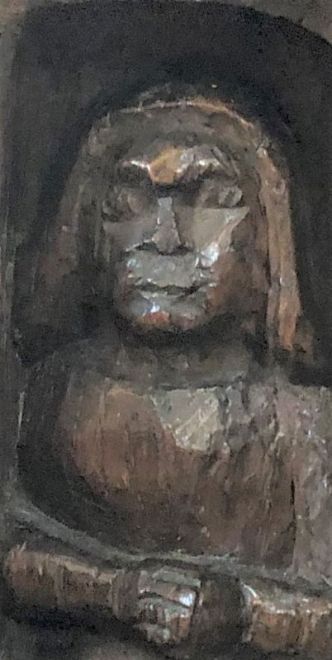 Photos: A Rae and A Moskvina

She looks out from the past

Watching, perhaps praying for us.

An anchoress in her cell like Mother Julien of Norwich

Pelican in her Piety   Claire Jordan

The deep brown of a glossy conker, the pew carvings invite touch -  a stroke, or a grasp when sitting or standing.  They are intricate, beautiful: they would originally have been carved in the fifteenth century.  Vandalised during England's turbulent history, many today are the result of Victorian restoration. 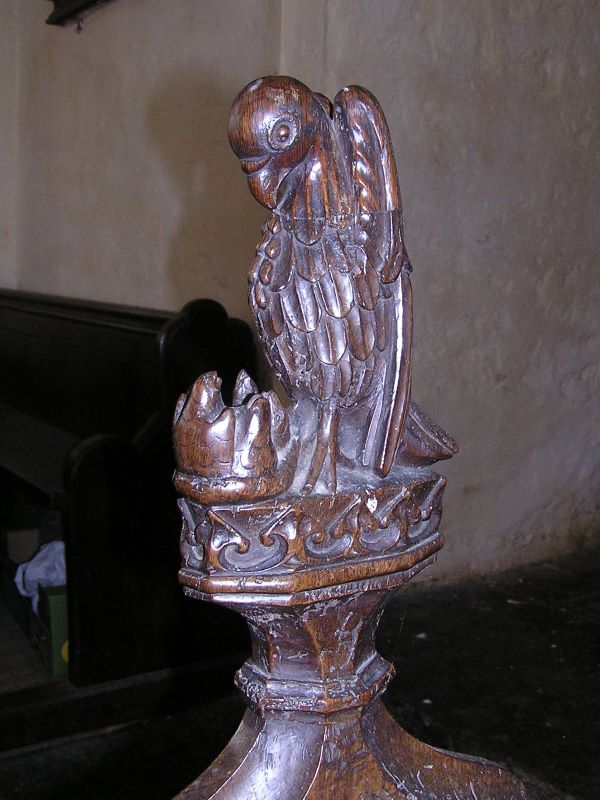 Pelican in her Piety Photo: A Rae

The wood carver is a person of consummate skill.   He must have dexterity, strength, maths, an eye for the finest detail, precision and endless patience.  He may have had a blueprint on paper but when he carves he deals with curvature, proportion and angle.  HIs tools would have been simple.  In the fifteenth century, understanding and beliefs were conveyed through images - the service was in Latin,  few could read and so the subjects of the carvings were often meant to remind people of good and evil.  The image shows the Pelican in her Piety - the (mistaken) belief that pelicans pierced their breast to feed their young on their own blood when food was short, meant it came to represent self sacrifice. 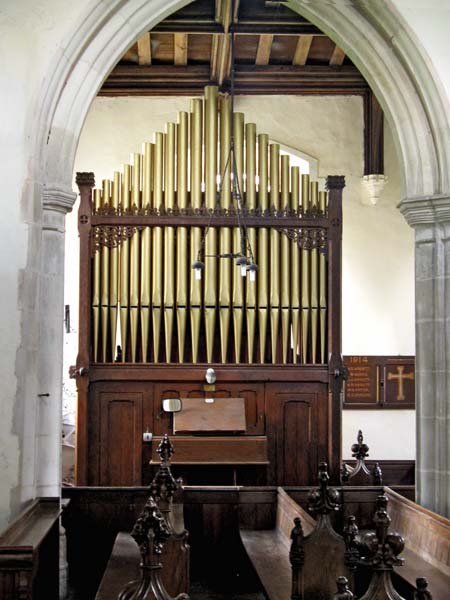 The Holdtich organ of circa 1850. Situated in the South Aisle.
Restored 2006 by Richard Bower.