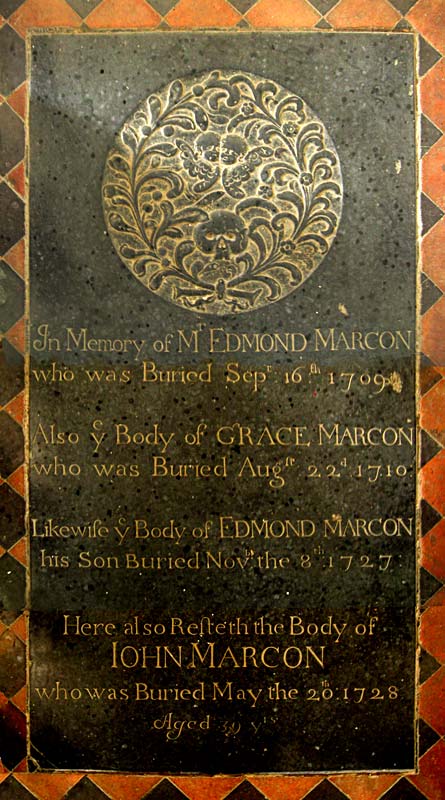 The memorial stone which inspired our story. Photo: Richard Ball

Christmas is often a time for creepy tales and ours was inspired by one of the memorial stones in the aisle of St Peter’s Church. The beautifully carved stone remembers Edmond Marcon who was buried on 16 September 1709. It was this date – 1709 – the year of ‘The Great Frost’ – which caught the attention of our talented fiction writer, Claire Jordan. Originally written for our Facebook Page. Claire was set quite a challenge: create a ghost story in less than 500 words. That’s not even a short story! We hope you agree that she did a great job.

Our story is entirely fictitious – there was no heartless priest at St Peter’s that we know of. But there was The Great Frost and we can only speculate about what this meant for the people of Forncett in 1709. Freezing conditions began in January 1709 and snow and ice were still around in mid April. There were frost fayres on the frozen Thames. When the thaw started there was wide spread flooding and devastating crop failures lead to starvation. As if that wasn’t enough Europe was in the grip of a flu pandemic. Hundreds of thousands of people died. You can find out more about The Great Frost .

Sadly we know nothing about Edmond Marcon or his relatives also memorialized on the stone. The fact that he was buried in September suggests he did not succumb to the cold, but perhaps the other terrible events of that year took their toll. What a research project if anyone would like to follow it up!

So, are you sitting comfortably? Then we’ll begin…

Crossing the short distance from Rectory to Church the Forncett Parish Vicar wished he had done so earlier. Several villagers, leaving the graveyard, turned away. He was not well liked, they thought him arrogant, lacking "fellow feelings". His predecessor had known every farming family well, always showing a gentle kindness, a true Christian they said. Dusk had fallen and the penetrating cold added the first hint of white frost in the fading light.   He put down his lantern and turned the great key in the church door, stepping inside with relief. The chores for Sunday's service could be accomplished quickly. Tomorrow he was invited to luncheon by Lord Liddlestone. He mused pleasantly, perhaps he could gain preferment, be a Bishop yet. Using his lantern he lit two more candles and placed them on shelves apart. As he did so his eye fell upon a memorial slab. The date at the top, 1709. This date, some 40 years earlier was engraved on his memory too. It had been the year of 'The Great Frost', when birds fell frozen from the trees, The Thames was covered in thick ice and people starved or froze to death.

He was then an undergraduate in Cambridge and he remembered with a shiver an icy starlit night, rather like this. He had had an unpleasant degrading experience. A small grimy boy had accosted him, grasping his silk and wool great coat and fixing fanatical eyes upon his own. He had disentangled himself with difficulty; indeed, he had had to use force, and then quickened his pace. On returning to his lodgings later that night a small bundled corpse lay in his path.   It was the same boy.

He sighed. The improvident poor, they were everywhere.   His fingers in their cream kid gloves were benumbed already. He must hasten. Tasks completed he turned to leave, snuffing the candles.   As the church darkened a sound above him took his breath away. The bell, the great bell, had been struck, one sombre knell. Breathing hard and suppressing an irrational sense of doom he held his guttering lantern aloft. All was still. Trembling, he hurried forward and wrenched the door of the bell-tower which swung open. Through the gloom of the interior he could just make out the bell rope, swinging gently.   Stepping towards the stairs, he glimpsed on the turn, a shadowy child-sized outline; at that moment his lantern failed, and the heavy door swung shut behind him.

His body was found the following morning. The local doctor declared it was "death from freezing" on the coldest night of the year. A sad accident, but, whispered by those who knew him better, 'heaven's audit, though delayed must and had, been repaid.'

Thanks to our talented author Claire Jordan